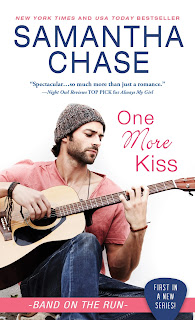 MATT REED IS HIDING
…from his fans
…from his past
…from a failure too painful to contemplate
Most of all, Matt is hiding from himself.

Vivienne will try anything and everything to coax Matt out of his self-imposed exile. But for this to work, Matt is going to have to meet her halfway…

Samantha Chase released her debut novel, Jordan’s Return, in November 2011. Since then, she has published twenty more titles and has become a New York Times and USA Today bestselling author. She lives with her husband of twenty-five years and their two sons in Wake Forest, North Carolina.


Then they easily moved on to “Chopsticks.” And from there she moved on to “Twinkle Twinkle Little Star.” They both laughed as she played it and Matt sang along and then he played it back for her, teasing that she needed to sing it to him.
She declined but laughed the entire time. There was no way she was singing for him – she knew her strengths and weaknesses and singing was not a strength.
“What about this one?” he asked and started the very basic beginnings of “Heart and Soul.”
“Oh,” she sighed, “this is one of my favorites.” She joined in and together they went on to play a duet – with Matt doing the A-section and Vivienne doing the chords. Their shoulders bumped together as they played and she couldn’t help the tingles she got as Matt quietly sang the lyrics beside her.
When she turned her head and caught him watching her with an odd expression on his face, she began to wonder if maybe he was remembering – the way he’d held her that night and kissed her…and let her go.
She jumped up from the bench so quickly she stumbled and almost fell over onto her butt. When she righted herself, Vivienne looked at him with wide eyes, her heart beating madly. “Sorry.”
“You okay?” he asked, obviously concerned.
“Um…yeah. I had a…a um…leg cramp and I needed to get up and move.” Way to sound like an eighty-year-old woman, Viv, she cursed herself. Trying to prove she wasn’t lying, she limped around a bit and then sat back down on the very edge of the bench – effectively putting space between the two of them. “So…I think you should be good to go. Why don’t you play something for me?” Her voice sounded weird even to her own ears.
Matt was still looking at her funny, but he didn’t say a word. He cleared his throat as he turned and put his focus on the keyboard and began to play. It was slightly off and riddled with mistakes, but he kept going. Vivienne was learning more and more about him, but she could tell he was tempted to stop and start over again with every mistake. But he didn’t. He kept on playing and singing.
He opted for the Elton John tune, and as he had before, he sang as he played. Vivienne could only stand and listen, his voice washing over her. She knew he hadn’t purposely chosen this song –the lyrics weren’t his – but for one brief moment, she let her imagination run wild. A small sigh escaped her lips as she imagined it was her own sweet eyes he was singing about.
Matt was looking at her again, and Vivienne felt hot all over. She was feeling things she shouldn’t. He was making her feel things she shouldn’t. Or maybe he was just singing lyrics, and she was reading too much into them. When he turned back to the piano and continued to sing, she told herself that was all it was – her imagination.
Her stupid overactive imagination.
With her mind somewhat made up, she allowed herself to relax a little and just enjoy the music. As the last note faded and the room became silent, she knew he was waiting for her to give him feedback. Forcing herself to smile, she turned her head and looked at him. “That was pretty good. I would never know you were new to playing the piano.”
“Really?” he asked, and she could tell he didn’t fully believe her. “Because it was riddled with mistakes.”
She shrugged. “And it’s completely normal. Everyone makes mistakes, especially in the beginning. If this is something you want to pursue, just keep practicing. Eventually, you’ll get to the point where you’ll be able to compose music of your own.”
He smiled gratefully. “You think so?”
“Matt, you know you have talent.”
“I used to…”
“That’s a bunch of bull and you know it,” she said a bit harshly. “You can’t be good at everything. It sucks but there it is. You’re a very talented musician. So you can’t act? Big deal? So you’re better at backup vocals than lead? There are worse things that could happen! Seriously, you have more skill and musical ability than most people, why can’t you just be happy with that?”
His answer wasn’t immediate. Instead, he got up and went to the kitchen and grabbed them each a bottle of water. When he walked back over and handed Vivienne hers, he smiled sadly, “I hate to fail.”
She couldn’t help but smile back. “It’s natural. We all do. You have to cut yourself some slack. If I were to get up on a stage and try to do what you do, I’d fail too. But it doesn’t mean I’d beat myself up over it. You just have to know your limitations.”
He sat back beside her and nudged her playfully with his shoulder. “Oh come on, you can’t tell me you haven’t tried to play the guitar a time or two. Or sang into a hairbrush while looking in the mirror. Everyone does that one. Or sings in the shower.”
“Oh, I sing all the time,” she quipped. “Just not well. And I’m okay with it.”
“Normally I am. I learned a long time ago it was better just to prove people wrong. But lately…”
“Okay, so what is it going to take for you to get over this?” she interrupted. “Because it seems like you are refusing to move on.”
“Move on? It just happened!”
“Weeks ago, Matt!” she cried. “I mean, I could see the first week, even the second, but now? It’s time to move on! You’re giving the press and the haters all the power! And personally, I think you’re making it worse by hiding out.”
His eyes went wide. “Excuse me?”
Okay – insert foot in mouth.