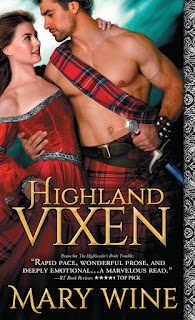 Marcus MacPherson is every inch the fearsome Highlander. He’s used to men averting their eyes and women cowering before him. He thinks he’ll eventually settle down with a nice, obedient bride. Instead, he gets Helen Grant… Stubborn as the day is long, fearless and dedicated to raising as much hell as possible, Helen is definitely going to challenge Marcus. And challenge him some more. And then some.

Hummm….the truth is, I am nerd enough to think history is fun. All the little facts and laws from centuries ago have always fascinated me. My parents were always listening to me expound on some little bit of wonderment…aka…historical fact.
Working these little facts into my work is something I try to do because I believe it’s important to write a book, set in the time it is dated. It was a different time and I think that adds spice to the unfolding romance. Life wasn’t fair then and it isn’t now. There is nothing I love more than to set out to see a couple overcome the odds and live happily ever after.
At least I love it when it’s finished! When I’m in that bottom of the ninth inner point, it’s hair pulling time as I try and work things out. Yes, I know I’m the author and should know these things but honestly, these characters have minds of their own!
I hope you all enjoy Highland Vixen. 2017 hold three titles from my Highland Brides and yes, I make you wait for that moment when it all comes together but they are all brides after all.
Cheers!
Mary Wine 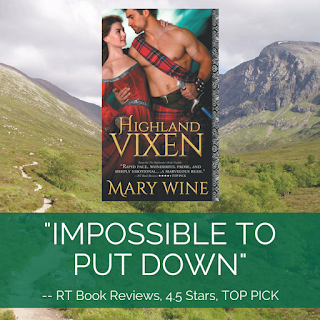 MacPherson Castle was huge. It needed to be, because there were over three hundred retainers alone. When supper was laid out on the tables, their conversation echoed through the stone corridors. But that didn’t stop a woman’s scream from penetrating the chatter. Men came off their benches, their kilts flipping aside as they started toward the back stairwell where the sound had come from.
What stopped them was their War Chief, Marcus MacPherson, coming through the wide arched passageway. He had a woman with him who wasn’t pleased to be his captive.
“What are ye doing?” Shamus MacPherson demanded from his seat at the high table.
“Uncovering a deception,” Marcus replied to his father and laird. He set the woman in front of the MacPherson laird. “Helen and Brenda are no longer in this keep. Ailis has kept to her chamber to deceive us all into thinking Helen and Brenda were there with her. While this one”—he pointed at the girl—“has made sure no one saw her face to notice the game.”
Shamus dropped his knife and looked at the girl. Her eyes widened. “I did as I was told by me mistress.” She lowered herself awkwardly.
He snorted at her in reprimand. “Allowing her to act foolishly and leave the protection of this stronghold is no’ to be commended, girl. Ye lack the sense to be a personal servant to me daughter-by-marriage.”
The girl paled, shaking like a dried-out leaf in a wind storm.
Shamus grunted and waved her away before turning to his other son. “Best ye go discover what yer wife has been about this last week.”
Bhaic MacPherson was already pushing his chair back. There was a grim set to his jaw as he moved behind the other chairs and down the steps to where his half brother was glowering at him.
“With child or no, that wife of yers needs a reckoning,” Marcus growled.
Bhaic stopped in the passageway, just out of sight of the rest of the clan. “She is with child, so ye’ll manage yer temper or no’ be seeing her.”
Marcus crossed his arms over his chest and grinned at his brother. Bhaic grunted, recognizing the promise in the expression. No one liked a fight better than Marcus, except perhaps Bhaic.
“I mean to have words with her, Brother,” Marcus warned Bhaic. “And they will nae be kind.”
“If ye truly want to frighten Ailis, speak nicely to her.”
Marcus grunted and took to the stairs. Bhaic reached up and pulled him back by the shoulder.
“Helen may well be in the hands of the Gordons, thanks to this deception. Ye killed Lye Rob, and they would take great delight in paying us back in blood.” Marcus shot back at his brother. “Brenda and Helen could no’ have more than half a dozen men with them.”
Bhaic’s face tightened. “I know ye’re right to be angry, Brother.” He passed Marcus and took to the stairs. He offered his wife a single rap on the door of their chamber before he pushed it in and Marcus followed him.
Ailis Robertson was waiting for them. She stood in the center of the receiving room, ready to face them. Damn, but Marcus loved her spirit, even when it was at odds with what he thought she should be doing with all that strength of character.
“Ailis…” Bhaic began.
“I’ve deceived ye,” she stated. “I’ve been pretending to be more ill than I am, so the women could stay with me and no’ be seen.”
“Ye know very well how the Gordons treat their captives.” Marcus pointed at her. “Did ye no’ think of what might happen to Helen and Brenda if they tried to ride across the Highlands with naught but a handful of men?”
She paled. Bhaic reached forward and gripped her forearm, but she sucked in a breath and steadied herself.
Marcus snorted at her. “How long have they been gone?”
“Four days.”
Marcus was gripping his sleeves so tightly his knuckles popped. “Where did they go?”
“To court, to seek shelter from Brenda’s kin.”
“Court.” Marcus spat the word out like a curse. “Right into the hands of the Earl of Morton. Ye might recall how that man treats women he thinks can be of use.”
Ailis stiffened. “I do.”
Marcus grunted at her before he purposefully turned on his heel and left the chamber, the longer pleats of his kilt flaring out behind him. 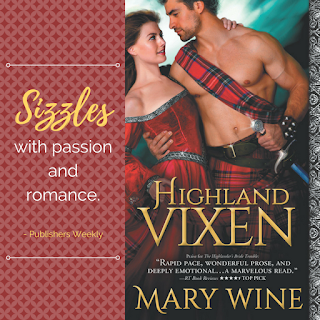