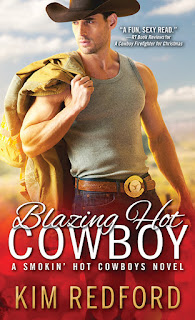 Title: Blazing Hot Cowboy Author: Kim Redford Series: Smokin’ Hot Cowboys, #2 ISBN: 9781492621508 Pubdate: January 3, 2017 Genre: Contemporary Western He’s all the heat she’ll ever need. Lauren Sheridan’s return to Wildcat Bluff after the death of her husband is bittersweet. Thirteen years have passed since she set foot in the place that’s always held her heart…and the sizzling memories of her high school sweetheart.  Kent Duval has it all. A proud rancher and volunteer firefighter in the small town of Wildcat Bluff, he’s missing only one thing from his life: passion. Kent last saw Lauren Sheridan when she was sweet sixteen and they were head-over-heels in love. Now she’s back, spunky daughter in tow, and he no longer knows which way is up. As the heat between them builds, Kent can’t help but wonder if past flames can be rekindled and second chances really do exist. Kim Redford is an acclaimed author of Western romance novels. She grew up in Texas wit
Post a Comment
Read more 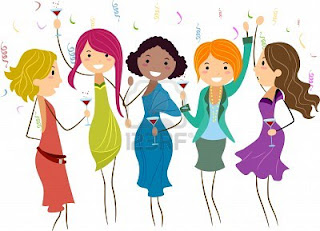 On December 31st New Year's Eve night starting at 10:00 PM EST we will open the chat room and chat away until whenever. We invite everyone to join us ad you do  not need to register. Just sign into chat ( please....please make sure your Java is up to date). At Midnight EST, I will pick a winner among who is in chat at time. The prize: $20 Amazon egift card. The prize is open to US and Canada residents. You must be present to win. Click here to reach the chat room:  http://client0.addonchat.com/sc.php?id=102122. Or go to the Romance Reviews website and click on the chat link on the page: http://romrevtoday.com/ Remember to get your java up to date prior to chat as I'm not responsible for your not getting into chat due to that. Hope to see you then.
1 comment
Read more

- December 28, 2016
Thank you to everyone that entered.  I will be continuing to run book contests throughout 2017. Here we go: Winner of A BRAVO FOR CHRISTMAS is Meredith Winner of MAID UNDER THE MISTLETOE is Patoct Winner of THE GREEK'S CHRISTMAS BRIDE is Penney Please email me at pattifischer@yahoo.com with your mailing info. Thank you.
4 comments
Read more 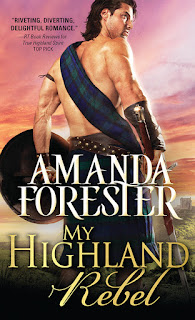 Title: My Highland Rebel Author: Amanda Forester Series: Highland Trouble, #2 ISBN: 9781492605461 Pubdate: January 3, 2017 Genre: Historical Romance A conquering hero Cormac Maclean would rather read than rampage, but his fearsome warlord father demands that he prove himself in war. Cormac chooses what he thinks is an easy target, only to encounter a fiery Highland lass leading a doomed rebellion and swearing revenge on him. Meets an unconquerable heroine Jyne Cambell is not about to give up her castle without a fight, even though her forces are far outnumbered. She’s proud, hot-blooded and hot-tempered, and Cormac falls for her hard. It’s going to take all of Cormac’s ingenuity to get Jyne to surrender gracefully—both to his sword and to his heart… Amanda Forester holds a PhD in psychology and worked many years in academia before discovering that writing historical romance was way more fun. A Publishers Weekly Top Ten author, her books have been
Post a Comment
Read more

Title: Solo Author: Jill Mansell Pub Date: January 3, 2017 ISBN: 9781492632429 It all starts at a party, as these things often do… · A one-night stand with far-reaching consequences · Momentarily enamored guests going home with all the wrong people · An unfaithful wife struck by jealousy and getting a dose of her own medicine · A shocking family secret revealed at the worst possible moment One fling follows another, and now the whole community is embroiled in a great big web of deceit, the untangling of which will charm you, amuse you, make you laugh and make you cry. Whatever’s going on in your life, Solo by Jill Mansell is the perfect distraction right about now… With over 10 million copies sold, New York Times and USA Today bestselling author Jill Mansell writes irresistible and funny, poignant and romantic tales for women in the tradition of Marian Keyes, Sophie Kinsella and Jojo Moyes. She lives with her partner and their children in Bristol
Post a Comment
Read more

Off until Monday.... Note: We will be having a New Year's Eve chat in the RRT Chat room on Dec 31st and there will be a gift card given away. Keep watching the blog next week to find out more info.
1 comment
Read more

Promo and Book Giveaway: A BRAVO FOR CHRISTMAS by Christine Rimmer 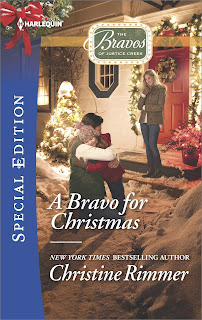 A BRAVO FOR CHRISTMAS – Christine Rimmer The Bravos of Justice Creek Series Harlequin Special Edition ISBN: 978-0-373-659095-8 December 2016 Contemporary Series Romance Justice Creek, Colorado – Present Day Ava Malloy has been raising her daughter Sylvie alone since her husband was killed in the military several years ago. They’ve recently moved back to Justice Creek, and Ava can’t avoid Darius Bravo, the man she’s known since high school. Back then, he asked her out once, but Ava, afraid she’d only be another notch in his belt, turned him down. Darius is handsome and charming, and her daughter adores him. He’s insistent on being friends with Ava and Sylvie, but she feels all he wants is her in his bed, and then once that happens, he’d lose interest. Ava decides to counter his charm by offering one of her own: a Christmas fling that ends New Year’s Eve. Darius is head of his own company and yes, he can have any women he wants, but he’s never forgotten Ava, the one who
3 comments
Read more

Promo and Book Giveaway: MAID UNDER THE MISTLETOE by Maureen Child 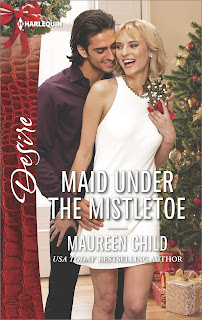 MAID UNDER THE MISTLETOE – Maureen Child Harlequin Desire #2487 ISBN: 978-0-373-73500-6 December 2016 Contemporary Series Romance Franklin, Idaho – Present Day Since artist Sam Henry lost his wife and son in a car accident, he’s holed himself up in his isolated mountain cabin, with his only contact being his housekeeper, Kaye. Kaye recently left on a month-long vacation and a temporary one is lined up, but Sam is horrified when she arrives and it turns out the replacement maid, Joy Curran, is young, and has a little girl. For a man who has frozen his heart to caring about anyone, he’s suddenly finding himself attracted to his new housekeeper and kind toward her daughter. Any attempts to avoid contact is hard to do, and he’s soon unable to resist the attraction. As a single mom, Joy is all about trying to keep her life uncomplicated for her daughter. The live-in housekeeping job proves fortunate as her house is being repaired and she promises to keep her daughter, Holly
2 comments
Read more 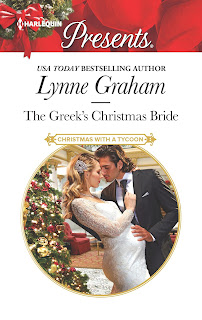 THE GREEK’S CHRISTMAS BRIDE – Lynne Graham Christmas with a Tycoon , Book 2 Harlequin Presents ISBN: 978-0-373-13488-5 December 2016 Contemporary Series Romance England and Greece – Present Day Billionaire Apollo Metraxis has no need for marriage or any woman in his life, but the terms of his late father’s will require him to marry and produce an heir within five years or he will get nothing. Apollo doesn’t want to see the fruits of his last several years of labor building his father’s company go down the drain, so he begins a search for the right woman, one who will give him an heir but not expect love. She also mustn’t be clingy or needy, which doesn’t fit any woman he knows right now. Then his best friend mentions Pixie Robinson, the best friend of his wife, and Apollo realizes that she may be the right woman. Add in that Pixie needs money and can be discreet, she is the perfect woman to marry and bear his heir. Pixie has barely recovered from serious injuries incurr
1 comment
Read more

I used random number generator to pull a number out and the winner of GOING DEEP by Anne Calhoun is.... Fedora! Congrats and email me at pattifischer@yahoo.com by the end of 2016.
2 comments
Read more

Promo: COMPLETELY YOURS by Erin Nicholas 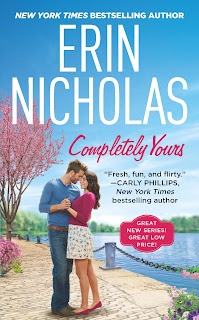 ABOUT THE BOOK Title: COMPLETELY YOURS Author: Erin Nicholas Series: Opposites Attract, #1 On Sale: December 20, 2016 Publisher: Forever Mass Market: $5.99 USD eBook:  $3.99 USD Add to Goodreads The first book in a brand new contemporary romance series from New York Times bestselling author Erin Nicholas about three geeky girls and the hunky guys who fall for them. Kiera Connelly leads a quiet life, and that's just how she likes it. She's built a name as a graphic designer and meets up with her friends online, all from the comfort of her living room couch. But when a rare outing turns disastrous, Kiera finds herself up close and way too personal with an unbelievably hot real-life hero. Zach Ashley doesn't see himself as a hero. He's just a regular guy who gets to help people every day as an EMT. But when he's called to a scene and has to treat his most gorgeous patient ever, he finds himself mixing work with pleasure. He never hesita
2 comments
Read more
More posts