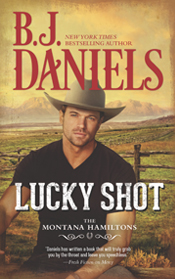 Hot shot reporter Max Malone is after the same story many of the other reporters are in Beartooth: get the juicy details on the return of Sen. Buckmaster Hamilton’s previously assumed to be dead wife, Sarah. He manages to get a picture of a woman he thinks is Sarah, but needs someone in the Hamilton family to confirm it, so he approaches daughter Kat Hamilton to look at a picture he took—the one of Sarah. Against her will, she confirms that it is her mother, but Max isn’t done with Kat. He’s intrigued why a beautiful woman like Kat is hiding her body in baggy clothes and appears to hate men in general. It also turns out that Kat is distrustful of her mother’s return, because there are questions to be answered, none of which Sarah appears to know the answers to. Kat and Max soon join forces to find out the truth…is her mother not who she seems?

Max has been all over the world and very few stories are hard for him to get to the bottom of, but in the Sarah Hamilton “mystery” it soon turns into a mystery. Sarah had seemingly committed suicide twenty years ago, leaving her husband and six daughters behind. A few months ago Sarah mysteriously appeared and it has thrown many lives into turmoil, with Sarah unable to remember where she has been these past several years. Max wants to get to the bottom of where she went to, but he soon digs up information that Sarah was possibly part of a terrorist group that wanted to overthrow the United States government. The group dispersed years ago—just before Sarah showed up in Montana and met Buckmaster—with a couple of the male members in prison for murder.

Kat and Max connect, though at first as adversaries, with her plan to keep an eye on him so he doesn’t disrupt her family’s lives. He’s intrigued by her and challenges her in ways no one has done so before. Max doesn’t have the time to get involved with a woman with his busy globetrotting career, but Kat is keeping him rooted to Montana. They both want to find out the truth of where Sarah has been and head to Los Angeles and then to upstate New York to the prisons where the men are located to get the answers. What Max and Kat find out may just shock both of them. As their days together continue, the sexual tension rises between. Will they finally act upon the lust that swirls between them?

LUCKY SHOT is the third book in The Montana Hamiltons series about the six Hamilton sisters and their father, who is about to launch a run for the presidency. While it is best to have read the prior two books (LONE RIDER and WILD HORSES) to get the beginnings of the Sarah Hamilton mystery, one can read LUCKY SHOT first without too much confusion. After, it revolves around Max and Kat and the love they soon discover between one another. In the course of this tale, a character from the start of the series meets their end and it soon changes the course of lives for a few. While some questions are answered in LUCKY SHOT, there will still be plenty more for future stories. After all, there are three more sisters…

A suspenseful and entertaining tale from the start, LUCKY SHOT will grab readers and not want to let you go. It’s well written and focuses on the relationships of the characters and the actions that change their lives. Grab this gem before it’s off the bookshelf.

1. How’s it feel to be back in Beartooth, Montana for the latest story in your Montana Hamiltons series, Lucky Shot?

I love my fictional Beartooth, Montana and some of my continuing characters like Nettie and the sheriff. It’s nice to have some older characters in love. :)

2. Which hot actor/actress would you fancast as Max Malone and Kat Hamilton?

I think Paul Walker for Max and Emily Blunt for Kat.

3. Will new discoveries about Sarah Hamilton bring the family closer together or drive them apart?

LOL, we don’t know do we? J That’s what makes writing this series so much fun. The more I learn about Sarah, the more I’m just not sure about that woman. She’s been such a fun character and will continue to be I believe right to the end of the series. J That’s all I can tell you. Other than, more is revealed about Sarah with each book right to The End.

4. Buckmaster Hamilton goes through a lot in this story. How has his character developed over the course of the series?

Buck is a good man. He has been through a lot, but I believe that he wants the best for his family – and the country. I don’t think he always goes about fixing things the right way. Like all of us, he has regrets. Also he thinks he could have done a better job raising his daughters than he did. But we all feel that way at times. His one weakness is his love for Sarah.

5. Which of the Hamilton sisters is most likely to get you in trouble?

All six of them have been a handful, let me tell you. J They are all so different. I can see myself in all of them. I love Kat because she says what she thinks. That’s why most of the family would rather not ask her opinion on anything. J She’s...prickly – less so after Max comes into her life. We’ve all known someone like her who has secrets that make her pull away from other people.

LOL, that is a good question. I think I’m in all of them. Maybe especially Bo in Lone Rider. I’d like to think I could be tough when I needed to be.
But right now I’m writing the last book of the series, HONOR BOUND, and I can see myself in Ainsley. She is the oldest, the one everyone has leaned on for years. Something happens that makes her realize she’s never really cut loose and lived. I love that in her. I think we all would like to throw caution to the wind sometimes and just do what feels good – no matter the consequences. So, yeah, I’m like Ainsley at times. :)

7. Which sister frustrates you the most?

Olivia from WILD HORSES. I wanted her to stop crying and toughen up. J And she did. I can’t imagine what she went through at the beginning of the book, how traumatic that was for her or how terrifying. There is nothing worse than the possibility of losing the man you love. She needed to grow up and she did.

8. Which sister is most likely to surprise us all?

Ainsley in HONOR BOUND. I think once we decide to stop being the Old Us, anything can happen.

9. What can we expect for the next Montana Hamiltons story?

I had fun writing HARD RAIN (out in March) because I got to know the first twin, Harper. I also got to “dig up” more about the Hamilton family and expose more of Sarah. I love the idea of old secrets coming back to haunt us. And there is nothing like a body turning up to do that. J
Then we meet Cassidy, the other identical twin, in INTO DUST (July), who has spent her life distancing herself from the family because she wants to be her own person. All that will be behind her when her mother’s past and The Prophecy change her life forever. This was a fun one.

I’m finishing up the series with HONOR BOUND, Ainsley’s story and the cowboy/agent who rides into her life. We finally find out everything about Sarah and have to say goodbye to the Hamiltons. Boo hoo. It won’t be easy. I’ve come to love them all.
But I will be starting a new six-book series called, GILT EDGE. I’m taking several characters from Beartooth with me, Nettie and Sheriff Curry.  I think readers will love the new family and their secrets and the danger that is right out their backdoor.

Be sure to visit the author's website at:  http://www.bjdaniels.com/