Spotlight Review and Promo: PURSUED BY THE RICH RANCHER by Catherine Mann 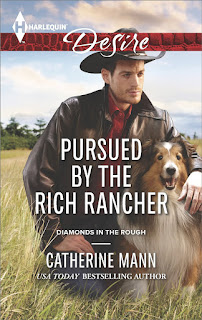 With an autistic son, Nina Lowery will do anything for him, including taking him to a kid’s cowboy camp at Hidden Gem Ranch. Shortly after arriving, Nina meets Alex McNair and mistakes him for a cowhand. Something about the sexy cowboy attracts her like no other man has ever…including her late husband, who was a spoiled rich kid who couldn’t handle their son’s autism. Alex is kind and gentle with her son, Cody, and it only endears her to him. They become closer and she even begins to wonder if a fling with him is in order. Then she learns that he is not a cowhand, but part owner of the ranch with his wealthy family. Will Alex turn out to be like her late husband?

Alex probably would have been drawn to Nina even if his grandmother hadn’t pointed out that she is the key to getting back some shares that were snapped up by the Lowery family recently. Woo Nina and win her over… and convince her to sell him the shares belonging to her son? Yet, what he feels for her goes deeper than a business deal. For a man who has vowed to never marry, he’s suddenly thinking about asking her to stay forever. But is he making a mistake in not being honest with her from the beginning?

PURSUED BY THE RICH RANCHER tackles a tough subject in autism and the emotional journey of the parents. Nina has devoted her life to Cody, and it’s important that he remain happy in life or she can expect a traumatic reaction. Cody’s father walked out of their lives, but soon after died, leaving his money to Cody. The Lowery grandparents remain in the background and help manage their grandson’s inheritance, but they would have placed Cody in an institution, and Nina will not let that happen. As such, with Cody requiring a constant and undisrupted day to day experience, she has chosen not to date or let another man into her life. But Alex is different. He treats her son well and they connect. For the first time since Cody was born, she’s letting herself live. Dates out with Alex have her falling hard for him.

Alex was raised mostly by his beloved grandmother, who was recently diagnosed with cancer. When she asks him to work on buying back the shares from Nina’s son, he didn’t expect to find Nina attractive, or that he’d find himself falling for her. She makes it clear Cody comes first, but soon she’s letting Alex into their inner circle. When he asks her to attend his cousin’s wedding with him as his date, he realizes it’s now serious. Will Alex take the next step and declare his love for Nina?

PURSUED BY THE RICH RANCHER is a beautiful tale that shows sensitivity of raising a child with autism. Nina has put her personal life on hold so she can raise Cody alone, despite the days where nothing seems to go right. Alex steps in, and soon they’re a team.Part of the Diamonds in the Rough series by Catherine Mann, PURSUED BY THE RICH RANCHER can be read as a standalone without too much difficulty. If you want to understand more about autism, then this tale will help. Nina is much stronger than people realize. With Alex, she only becomes stronger…and more beautiful.

An enjoyable tale I highly recommend, make PURSUED BY THE RICH RANCHER a part of your next reading journey

“The camp setting provides a seductive backdrop for romance, and the author gives an accurate description of life with an autistic child.”

–RT Book Reviews on Pursued by the Rich Rancher

“This romance was hot and sweet, the connection was instant and their romance develops fast, but it still felt believable.”

–Lola’s Reviews on Pursued by the Rich Rancher

“…a deliciously adroit and readable romp…”

–Publishers Weekly on Cover Me

Single mom Nina Lowery has never understood the sex appeal of cowboys. Until she brings her son to a weeklong horse camp and meets the wealthy rancher in charge. Seduction isn't part of Alex McNair's plan to earn his piece of his family's estate. Yet plans have a way of changing. Nina and her little boy hold the key to Alex's future. Breaking the promise he made to his dying grandmother is not an option but neither is breaking Nina's heart.


ABOUT THE AUTHOR:
USA Today bestseller Catherine Mann has books in print in more than 20 countries with Desire, Romantic Suspense, HQN and other Harlequin lines. A six-time RITA finalist, she has won both the RITA and the Bookseller's Best Awards. Catherine resides in Florida with her aviator husband, their four children and a menagerie of pets.