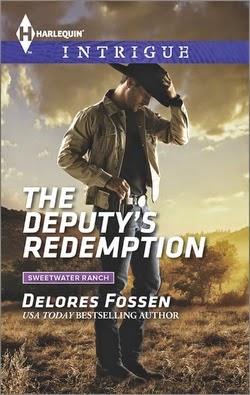 1. THE DEPUTY'S REDEMPTION is the latest in your Sweetwater Ranch series. Can you tell us a bit about the series and characters?

The series is about a family of cowboy cops who are torn apart when their mother is arrested for murder. In THE DEPUTY'S REDEMPTION, Colt McKinnon is a deputy sheriff who also helps his brothers run their successful Sweetwater Ranch. He has to risk his life to protect Elise Nichols, a woman from his past who could ultimately send his father to prison.

2. Elise and Colt have an interesting past together. What does this bring to the story?

I think their teenage crush has remained over the years, but now that they're adults, they have to deal with the old attraction and the new problems that it's creating. If Colt gives into the attraction, he could be betraying his family since Elise's testimony could lead to his father's arrest.

3. Colt McKinnon is an incredible name for a character. Do you have a method down for creating names?

I listen for names in airports, grocery stores, wherever I am. Whenever I hear one that I think might fit, I put it in a file and wait until the right story comes to mind for that character's name.

4. Do you have any say in the design of your book covers?

I do fill out a detailed art fact sheet for Harlequin for each book, and I describe three scenes for the art department. The idea is for me to convey the tone and appearance of the main characters and the story.

5. Are you a plotter or a pantser?
Definitely a plotter. I'm one of those writers who can't start until I have the plot worked out.

6. Using just 5 words, how would you describe Elise and Colt's love affair?

Love that manages to survive.

7. What drew you to writing romantic suspense?

I love weaving together the romance and the mystery, and the danger makes the stakes so high. It's easy to put the petty stuff aside when the bad guys are trying to kill you.

8. If THE DEPUTY'S REDEMPTION was made into a movie, which Hollywood actors would you cast for the main characters and why?

Charlie Hunnam for Colt, but I'd want him less buff. Colt is more on the lanky side.

Natalie Portman for Elise. There's a quiet strength about her that I think Elise has.

9. What is your go-to snack when you're writing?

Tea and cookies. I wish it were something healthier, but they feed the muse. (Or at least that's what I like to tell myself!)

When Delores Fossen was a child, she used to sneak around and collect fingerprints, hair strands and fibers left by family members and guests. At age eight, she solved a crime. Well, sort of. When someone nibbled off the ear of her chocolate Easter bunny , she searched for clues and soon discovered that her sister had chocolate bunny breath. With that "case closed," Delores believed she’d discovered her calling--she wanted to be a Texas Ranger or FBI agent. But after realizing that she just wouldn't be very good at chasing down bad guys, she opted for a slightly different career path--she creates fictional cowboy cops and other law enforcement officers. Writing romantic suspense is something she enjoys immensely, and it has earned her the Romantic Times Reviewers Choice and Booksellers Best Awards, and she was a finalist for the prestigious Rita.


Married to an Air Force colonel and the mother of four children, Delores has lived in England and all over the U.S. She’s had a variety of careers and jobs: an Air Force captain, a special ed teacher and a rehab counselor. None was as fun or challenging as the time she’s spent as a stay-at-home mom. She still collects fingerprints, hair strands and fibers every time she dusts or vacuums, which isn’t very often.

Interesting information about the author:

Bon Appétit and a Book: A delicious recipe of your choice to enjoy alongside the book
http://www.foodnetwork.com/recipes/ina-garten/shortbread-cookies-recipe.html Shortbread cookies. They’re so easy to make, and they’re perfect with a cup of Irish tea and a book.
Song Playlist: I usually have an odd mix for a book’s playlist, mainly because I’m writing anything from a love scene to a shootout. Here’s the playlist for The Deputy’s Redemption
All I Want Is You—U2
Different Drum—The Stone Poneys
Welcome to the Jungle—Guns N Roses
You’re the One—Dwight Yocum
Flesh and Blood—Johnny Cash
Take Me to Church—Hozier

Love Lessons Learned: Real life romance lessons learned from the book
Finding and keeping love is hard work but worth it when you’re with the right person.


Win a copy of her book!
Post a comment, question or respond and you'll be entered in a chance to win a copy of this book.

I can't wait to try Ina's recipe. Thanks for sharing!