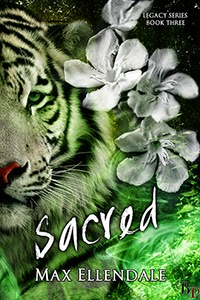 Some decisions are easy to make, especially when it comes to the well-being of your mate. Even if the decision means ending the life of another...

Just when Shawnee thought her life would finally settle down, an unexpected visit from Vanessa’s family sparks an unraveling of a different sort. The visitors bring news that the Pride is in trouble. Dugan, a weretiger who relentlessly bullies the most vulnerable members, threatens to take over. Shawnee returns with Vanessa to her homeland and, with the help of Xany and an unsuspecting submissive, works to bring down Dugan before he dismembers the Pride. Can Vanessa stand up to her nemesis and restore the Pride to safety? Will she break under the pressure, or can Shawnee protect her mate from the torment? Shawnee quickly learns to draw on the strength of her pack family and with a keen bit of luck, may very well be the key to saving the Pride and her mate.
Buy the ebook
Buy the print copy


Chapter One
"Doctor Twofeathers?" The charge nurse called my name as I stood on the desk, reaching for a book on the highest shelf of the medical library.
"Yes?"
"There's someone here to see you," she said, her lips pursed in a way that tried to stifle a small smile.
"Is it a walk-in?" I hopped down from the desk and straightened my lab coat. It wasn't everyday that I got caught climbing for answers. The look on the nurse's face told me I hadn't played it off as coolly as I'd hoped.
"You...could say that." A wry grin lifted the corners of her mouth. "A very handsome walk-in."
Could it be Mal? A rush of excitement shot through me as the nurse nodded toward the door. I followed her to the nurses' station by the entrance of Stormhill Hospital Center's emergency room. I'd worked here for a few weeks, part-time at the request of my pack. Despite the hospital administrator urging me to work full-time, it just wasn't in my best interest. Ultimately, it was my decision. I knew that spending too much time away wouldn't be the best approach to strengthening our new bonds. Even though I only spent less than twenty-four hours a week out of the house, it seemed like a lot more. The part-time position afforded me the opportunity to work on building up a private practice at the cabin. This made Vanessa happy and soothed by the fact that my work outside the house was temporary.
Waiting for me by the front desk was my mate, Mal. I tried my best to keep the surprise from my doctorly poker face, but I couldn't help it, really. He greeted me with a casual hug, then held up the brown paper bag he carried.
"I thought we'd have dinner together tonight. I bribed Beth into telling me when you were taking your break," he said, shooting a glance at the young brunette receptionist.
"Bribed her with what?" I laughed.
Beth turned in her chair, a cheeky smile plastered across her face. She held out her hands and Mal tossed her a giant wrapped sandwich.
"With food." A grin spread across his lips, lending light to the stark curve of his jaw. The overwhelming desire to kiss him was hard to suppress.
"Thanks, handsome boyfriend of Doctor T," Beth's voice carried on a light chuckle as she set her dinner on the desk.
"She's the best." I smiled at Beth before waving at Mal to follow me. "We can eat in my office."
My office at the hospital was a cozy space tucked into the corner of the first floor. The windows looked out into the parking lot and the trees beyond it. It was the first time that Mal had visited me, and I wanted to show him everything. He looked around at the charts and graphs on the walls, then lifted an eyebrow at the chalkboard someone had used for a game of hangman.
"The residents sometimes share the office," I explained through a laugh. His expression lightened as I nudged the door closed behind me.
"Is it usually this quiet here?"
"Only after midnight," I said as he set the bag of food down on the desk. Mal turned around to lean against it and smiled at me. His eyes wandered over me from head to toe.
"What?" I asked and followed his gaze, wondering if some sort of ER goo or hospital stench covered me.
"You really do look like a doctor," he said, voice laced with surprise as his eyebrows flicked upward.
"I am a doctor." I laughed and made my way over to wrap my arms around his neck. He gave a light tug to the stethoscope that dangled along my chest then used it to pull me closer.
"You sure are," he said, and in an instant, his lips pressed to mine.
Relief flooded me as the soothing mate bond thrummed happily between us like an invisible strand connecting our souls. The heat between our bodies was wonderfully unbearable. He let go of the stethoscope, then slipped his hands under my lab coat to rest on my waist.
"How are things at home?" My voice seemed to sigh.
"Vanessa is driving Xany crazy." He laughed as his fingers stroked along the waistband of my scrubs, igniting the familiar ache of desire in my belly. "When she tries to start a conversation or ask her a question, Vanessa's responses are just totally weird."
"Poor Xany." I couldn't help grinning at the notion. Vanessa's responses were peculiar on a regular basis, and during heat time, they were practically unfathomable.
"I think Xany and Ana went to Imogene's this afternoon to escape for a while. It's been strange for everyone hanging around a feral weretiger that's in heat." His hands came to rest on the small of my back. The heat of him swallowed me whole.
"I don't usually notice until she completely stops speaking in full sentences." I shook my head. "Is Mom okay?" I asked, and toyed with the collar of his shirt. I couldn't bring myself to query any further. My mother had been back in my life for barely a month before I started working again and, I had to admit, I wasn't putting in my best effort to reconnect with her. What would she think when she discovered all of my secrets?
"She's the most patient wolf I've ever seen." He smiled.
"I know." I closed my eyes. His chin pressed against my forehead. "Thank you for coming to see me tonight."
"My pleasure." With a grin that seemed malevolent at best, his hands dipped into my pants and cupped my rear. I gave his ponytail a firm tug when his hardness pressed against me.
"Is it?" I smiled. If my werewolf had taught me anything, he'd taught me how to play. And to take the bait.
About the author:


Max grew up just outside of New York City, spending most of her formative years outdoors creating wild ghost hunts with neighborhood kids, setting booby-traps to capture unwitting family members, and building clubhouses on top of ten-foot walls. Max wrote her first story at the age of twelve and titled it Circles of Friendship. Through the years, Max has written several short-stories and poems, all of which met the wrath of the “Not Good Enough” monster and ended in fiery demise.
Max regained her confidence when she began writing scholarly articles and research theses on her first trip through graduate school. It took several years for her to break the habit of the formal writing that marred her creativity. An additional Master of Fine Arts degree in Creative Writing was Max’s biggest support in this. Max writes primarily sci-fi/fantasy, paranormal romance, and Young Adult stories.