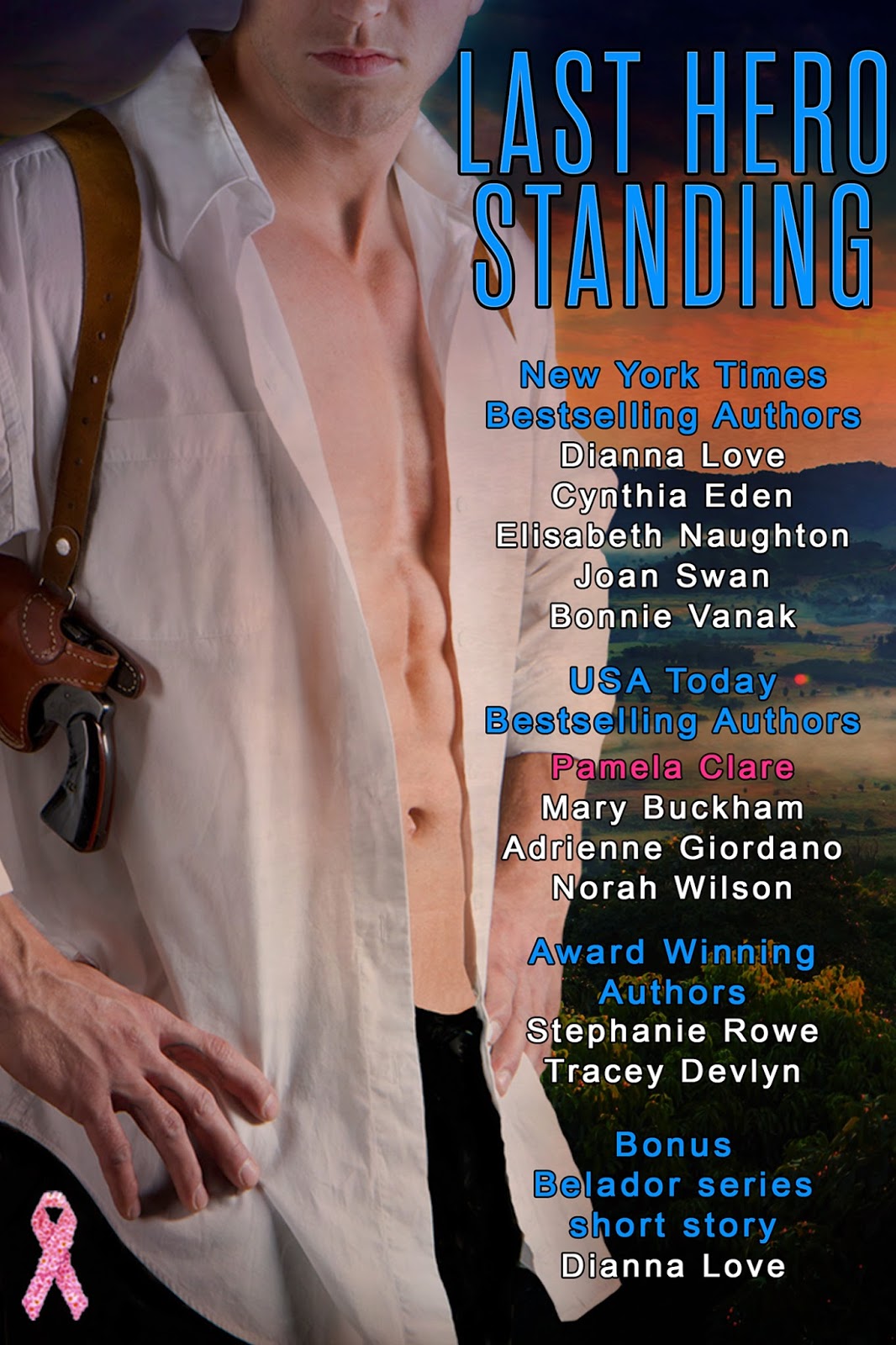 From Taken by the Alpha Wolf by Bonnie Vanak:

From the moment he saw the pale-haired beauty, Draicon werewolf Etienne Robichaux vowed to claim Cindy Parker as his mate. Nothing will stand in his way. After learning she’s targeted by a Columbian drug mob, the former Navy SEAL will do everything in his power to protect her.

His touch ignites her passion and his tender concern touches her soul. But Cindy has a deadly secret she hides from Etienne, one that not only risks losing her heart to handsome shifter, but her very life.

Authors donate to anthology to raise money for colleague stricken with breast cancer
Eleven authors have donated their work to a box set of novellas to raise money for the medical expenses of a colleague stricken with breast cancer. The LAST HERO STANDING box set, which is set to release on Oct. 28, features 11 novels and novellas for only 99 cents, including a bonus short story from New York Times bestseller Dianna Love. All the proceeds from sales of the box set will go toward the medical expenses of USA Today bestselling author Pamela Clare, who was diagnosed with breast cancer this past April and has been unable to work since then.
PAMELA’S STORY
http://www.usatoday.com/story/happyeverafter/2014/10/09/pamela-clare-breast-cancer/16920051/

Enjoy 11 emotional stories - 2000 pages filled with all types of heroes from small town to international action-adventure who earn and protect those they love. Over 360 reviews with a 4.5 star rating!!!

PLEASE NOTE: This box set will be available for ONE MONTH ONLY, and all proceeds go directly to the medical fund for box set author Pamela Clare, who is in the midst of her own battle with breast cancer. Everyone who touched this project donated their time and stories. Please help us help her by treating yourself and your friends to a box set full of great stories!

New York Times Bestseller Dianna Love
KISS THE ENEMY, a Slye Temp novel
"It seems with each book, this series gets better..."

New York Times Bestseller Cynthia Eden
FIRST TASTE OF DARKNESS, a novella
“Plenty of passion to fan yourself but also enough love...to make you swoon.” –So Many Reads

“There she is.”
Crouched down, Etienne Robichaux peered through the thick trees at his target. On a narrow path cutting through thick brush of the Florida Everglades, the sleek white wolf nosed through the bay head.
A thicket of cocoplum, red bay and wax myrtle provided excellent coverage. Overhead the March sun was brilliant and warm, no clouds in the sharp blue sky.
Perfect day for an abduction.
Green camouflage pants, an olive T-shirt and jungle boots protected his body against branches and sharp sawgrass. Etienne ran a finger along the bandana covering his light brown hair. Hunkered down beside him also in camouflage, his two younger brothers studied the prey.
Three Draicon werewolves on recon… for another Draicon wolf. The image would’ve amused him, had the situation been less grim.
“You sure that’s her?” Alexandre wondered.
“I know her scent, could pick it up in a garbage chute.” He drew in a deep lungful of  the delicate fragrance of fresh raindrops on lilies cutting through the swamp’s more earthy smells.
Gabriel shook his head. “She may fight you.”
“Doesn’t matter. The intel said they could come after her at any time.” Etienne’s pulse raced.
Getting caught in heavy crossfire during the Lebanon op had been nothing compared to hearing that news. Hell he could take all the tight situations threatening his ass when he’d been a U.S. Navy SEAL and retained his usual calm, tight control. None of them compared to the gut-wrenching fear of losing Cindy.
Before even having her, so to speak.
“Her father,” Alex began. “You warned him, tried to reason with him?”
Etienne snorted. “Wouldn’t listen to me. Damnit, it was like talking with a rock. This is the only way. I’m taking control.”
Alex looked up, his lean face tight.
“Screw it, mon frere. Go for her,” Alex said, growling.
Gabriel’s eyes flashed amber, signaling the emergence of his wolf. “Do it.”
The white wolf loped down the path toward the open plain. Now.
Bolting out of his cover, Etienne leapt onto the path. He charged and tackled his prey. The white wolf snarled and struggled, but he pinned her down, one hand wrapped around her muzzle. Careful not to hurt her, he kept her subdued by superior strength and weight. Still the wolf fought to be free.
His brothers raced toward him. Gabriel and Alexandre stood guard at the entrance to the bayhead, their sharp eyes scanning the flat plain of sawgrass. The white wolf twisted suddenly, and nearly escaped. Etienne tightened his grip, smelling fresh panic and animalistic fear as he tussled with her.
“Cindy, it’s me, Etienne. Shift back.”
The wolf’s struggles eased, but she did not Change. He tried for the telepathic link they shared as destined mates. All he got was a whining buzz of angry terror.
Etienne let loose a rich Cajun curse, causing his brothers to turn.
“She’s not shifting back. You sure that’s her?” Alex asked.
“Or an escapee from Metro Zoo?” Gabriel added.
A frustrated growl tore from his throat. “Cindy, c’mon, sweetheart shift back!”
Beneath his heavy weight, the white wolf panted, her energy expended. Made no damn sense. “Cyn, stop playing games. I’m here to protect you.”
“I hear the zoo is nice,” Gabriel drawled. “Maybe you could set up housekeeping there.”
“Shut up.” Etienne partly eased off the now-dusty white wolf, turning her muzzle to face him.
Blue eyes burned like lasers as the white wolf glared. With a flare of iridescent sparks, a lovely blonde woman replaced the Draicon werewolf. Finally.
He felt himself melt as he stared into her deep blue eyes. Damn, she was so pretty, such a lady. When she wasn’t a wolf.
“Etienne?”
The melodious timbre of her voice stroked his senses. Then her gaze sharpened with fury. “Get off me.”
Warm female flesh had replaced fur. Etienne felt a surge of hot desire raged as he realized he cupped a soft, round breast.
His future mate was naked.

1.    How has cancer touched you personally?
Yes. My mother, aunt and grandmother and uncle died from cancer. Right now our beloved rescue dog, Holly, is battling breast cancer. I never knew a dog could have breast cancer, but sadly, now I do. Holly is now on a regimen of chemo and had almost the same kind of tumor Pam had.

2.    Why did you participate in the LAST HERO STANDING fundraiser for fellow author Pamela Clare?
Pam is a good friend and I wanted to do what I could to support her in this battle. Cancer is an extremely draining disease, both financially and physically. 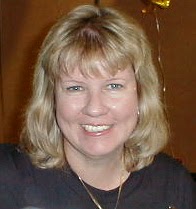 Bonnie Vanak is the New York Times bestselling author of paranormal werewolf romances. A former newspaper reporter who became a writer for a major international charity, she travels to destitute countries to write about issues affecting the poor. Her books take readers from the mysterious, dark alleys of New Orleans to the sweeping plains of Montana. Visit her Web site at www.bonnievanak.com. 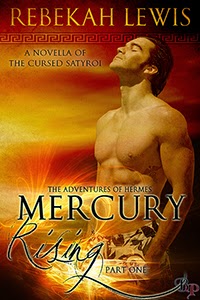 When Zeus refuses to demand Apollo release Daphne from captivity in Olympus, the only option left is for Hermes to free the nymph himself. A simple task for a god with his skillset, but risking the wrath of Apollo never went well for anyone.
However, imprisoned nymphs aren't distraction enough when a former flame crashes back into Hermes' life. It’s been a long time since he laid eyes on Hybris, and the timing couldn’t be worse. As the goddess of hubris, she has many quirks—such as being incapable of apologizing. And no matter how much she tries to assure him she can be trusted, the memory of her betrayal remains.
As they formulate a plan to rescue Daphne, Hermes soon suspects no threat is greater than the tribulations of the heart.
Don’t miss the first part of The Adventures of Hermes, a companion series to The Cursed Satyroi.
BUY LINK


"I don't have time for this, Hy. I have things to do. Important things." A promise made to a satyr, one Hermes intended to keep. A damsel in distress. Heroics and all.
Hybris yawned. "Yeah. I see. Meandering around California and swimming at the beach is a matter of life or death."
Shaking his head, he opened the glass door into the house. He attempted to shut it behind him, but she shoved past. Hermes made an extensive effort not to notice she still smelled like pomegranates.
He failed.
"Well, I was waiting for Zeus to summon me before you showed up with your judgy...judginess." He closed the door and turned back to find her relaxing on his couch, despite her soaking wet clothing. Rude.
She studied her nails. "And did he?"
"Not yet."
"Then you aren't doing anything important." Her gaze flicked down to his groin. "Yet." Standing, Hybris advanced toward him.
"No. Oh, no, no, no. No." Hermes rocketed away and hovered out of her immediate reach. "We are so not going there again. Not this time. Not this day. Not happening." Was she for real? After all she'd done, she wanted sex from him?
Unsure if his ego or her influence on his personal hubris affected him, a warm smugness took hold. He'd always been cocky, but she could bring it out to the maximum.
"And why not? I'm a beautiful woman, you desire me, and you have an open schedule. Take off your pants and pleasure me."

Rebekah Lewis holds a Bachelor of Arts in English Literature. She is an award-winning cover artist for digital publishers, and enjoys every minute of it when not immersed into a world of satyrs and Greek gods. Always feeling the need to be productive, she can be found creating something whether with words or images, or with arts and crafts. She resides in Savannah, GA with her cat, Bagheera.
If you would like to follow Rebekah on social media or contact via email, use the following information:
Website: www.rebekah-lewis.com
Email: lewis.rebekah@rocketmail.com
Facebook: http://www.facebook.com/RebekahLewisAuthor
Goodreads: https://www.goodreads.com/author/show/6537317.Rebekah_Lewis
Twitter: @RebekahLLewis