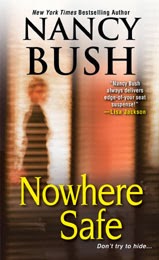 THE GUILTY
She senses their twisted desires before she meets them. It’s as if fate is helping her stop these monsters from preying on others the way she was preyed upon. And after she has delivered brutal justice, she’ll let the whole world see their guilt.
WILL ATONE
“I must pay for what I’ve done.” The first victim—naked, bound, frozen to death—wore the note strung around his neck. Now there’s another note—this one attached to Detective September Rafferty’s own stepbrother. Stefan survives, but September is sure he knows more than he’s saying. Someone is eliminating suspected sexual predators. And the only thing more dangerous than a madman is a killer who’s ruthlessly sane.
IN BLOOD
Racing to predict the next target, September finds herself drawn into a harrowing and deeply personal case. For this time, there are no innocents—only the one who kills, and those condemned to die. . . .

This is a romantic suspense read and sounds really good! If you're interested, post a comment and later in the week I will draw the name of the winner.
Contest is open to US mailing addresses only.
at March 10, 2014

It looks like a good story. Thanks for the giveaway!

I do love a good romantic suspense story. Count me in.

I love me some romantic suspense! That cover is chilling, and the premise sounds great.

Nancy Bush is a great author and I love romantic suspense books. Thanks for the giveaway! :)

Romantic suspense is my very favorite! I'd love to win a copy of this book, it looks excellent.

While I love historical romances, I do enjoy a good romantic suspense on occasion. I've never read Nancy Bush before, but I'd love the chance to read her book. Thanks for the giveaway.