Q & A with Samantha Hunter...and a giveaway!


Samantha Hunter joins us today for an interview...and she is giving away a whole set of the Berringer brothers books (print) to one lucky winner (US mailing addresses only). 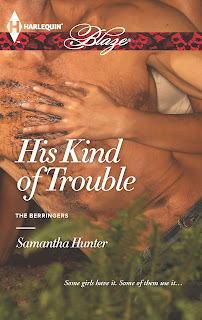 The book out now in paperback (e-release Jan 1) is HIS KIND OF TROUBLE, and it’s the third in the Berringer Bodyguard series. Chance Berringer is the youngest of the Berringer brothers (all hot, all bodyguards!), and he’s inclined to all kinds of neck-breaking adventure, but he hasn’t experienced potentially heart-breaking adventure until he meets Ana Perez, a TV show chef whose life is in danger. He follows her to Mexico over the New Year’s holiday, and gets a whole lot more than he bargained for.

2.      Can you tell us a little about your favorite scene in the story?

Oh, that’s difficult because I really enjoyed writing this book… there is a first-kiss scene in the courtyard of Ana’s family home in Mexico that I like a lot because I like the setting and the kiss, but I also enjoy the family aspect of this book. All of Ana’s family is around for most of the book, and this scene is when Chance first meets her mother right after kissing the daylights out of her daughter – I had a lot of fun with that. Her mom was a fun character; I really like including family in my Blazes when I can, and this family added a lot of energy to the book.

3.      What was one of the most surprising things you learned in creating your story?

Hmmm. I wrote it a while ago, so I have to remember back, but I learned a lot about the Yucatan and Mexico, the jungles and the people, that I never knew before. I had to do a lot of research, since I’ve never been there. I found out a lot about local customs, how they celebrate the New Year (which is so much fun!) and various traditions. I tend to write about places I’ve been, since setting is important to me – I like to offer as much detail as I can and bring settings to life, so I had to do a lot of research to do that with Mexico, and I was surprised, I think, at how well it went. And it really made me want to visit the Yucatan. J

Oh, there are so many – I’ve been at this for near a decade now, twenty-plus books, and on a personal level, there have writers and friends from all reaches of life and genres who have helped me along the way. Really too many to name, and I wouldn’t want to leave anyone out.  But in the way of books or authors who influence how I write (or how I aspire to write) I would say SEP, Robyn Carr, Nora, Carly Phillips, Janet Evanovich, Brenda Novak  and several mystery authors, Robert Parker and Cleo Coyle are two that come to mind, actually, since I love mystery and many of my books have some kind of mystery or suspense element, including HIS KIND OF TROUBLE.

I’m very fortunate in that they have always been 100% supportive and enthusiastic – all of them, in laws and my own family. I love talking books with them, as they’re all readers as well. They read my books and display them in their homes. After all this time, they see it as my work, much in the same way they all have their work, and we all talk about our work. My husband, of course, is my number one supporter and Head Encourager in the house. ;)  He keeps me going, especially when things are tough.

Oh, so many. LOL.  I’m always jumping into some kind of activity or craft, and usually have several projects going at once (my sewing table is stacked up at the moment…). I like to garden, indoors and out, and a big passion of mine is antiquing, though that runs the gamut from roadside junk shops and garage sales, estate sales, to auctions, etc and if I could get into junkyards and spots like American Pickers do, I would. ;) I love cast iron, old furniture, and that leads to more projects, like the renovation of an old library table that I recently did, or the Victorian chairs in the basement waiting to be reupholstered. I’ve always enjoyed cooking, TV, and have been into yoga the last few years. I’m always trying something new.  All of this usually feeds back into my writing as well. My characters have varied jobs and interests.

Well, I just finished all of the writing I had slated for 2012, a book with my agent right now, and more Blaze and Samhain proposals in the computer files, getting ready to go, though I’m taking the holiday off. However, I have two new releases coming up with Samhain, my first two with them, and I’m pretty psyched about them:  TIGHT QUARTERS (April, 2013), which is part of the Strangers on a Train Anthology with five other amazing authors and BENDING OVER BACKWARDS (July 2013).  These are both novellas very much in the tone of my Blazes, so I think anyone who likes my Blaze books will enjoy these.

I’m online a lot, like most of us, at Twitter and Facebook, and I have a blog at http://authorsamanthahunter.wordpress.com/  and a newsletter readers can sign up for at  http://www.samanthahunter.com/.  You can also email me at samhunter@samanthahunter.com and if you check out the books, please drop a note – I love hearing from readers!

Excerpt from His Kind of Trouble:

Thanks for the excerpt and post. I was interested to see that one author who influenced Samantha's writing was the late Robert B. Parker. I loved his Spenser books. He had a spare way of writing that really drew the reader in quickly. He is missed.

Thanks for having me here today, and for the comments. If anyone has any other questions I can answer, about Blaze, the books, writing, whatever, please feel free to ask, and I'll try to stop by a few times to day and comment. Thanks!

Congrats on the release. This book sounds fantastic. Can't wait to read it along with the other books in the series. Thanks for the great interview and excerpt. I like the last line about the thought following Chance into his dreams.

Joanne, thank you for coming by :)

Thanks for the giveaway. I've enjoyed a few of Samantha's Blazes.

Great interview and excerpt. Your book sounds awesome. Thank you for the amazing giveaway.

Jane and Crystal, thanks for stopping by :)

Hi Samantha! Wow, hot new Blaze covers! LOL. I had to check if that was all chest hair (Grin)
I remember reading I think it was a cowboy read of yours and he was a calendar guy. Now I got to dig out to re-read! I love bodyguards, that tension from being together and protecting and that tension again from trying to not let the romance happen with protecting the heroine! ITs a favorite theme! Do you think that there will me more from this series even if you wrote all the brothers books? I love reading bodyguards! Loved this peek (excerpt of Chance) It was great to read your interview!

No need to include me--Sam's series is awesome!!