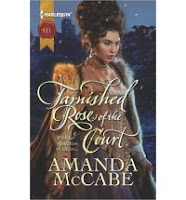 Widowed Celia Sutton waits for an audience with Queen Elizabeth. Her husband's family won't help her, and her grandfather's lands have been bequeathed to a Swedish cousin, as told in THE WINTER QUEEN. She is penniless and needs the Queen's intervention. While waiting, she thinks she sees John Brandon, the man she let seduce her three years ago. It is an unpleasant shock. Shortly after their encounter, her brother was executed for planning treason against the queen. Since then her parents and her husband have died from a plague. Elizabeth tells Celia she can't help her regain her grandfather's land, but she has a mission for Celia. She wants to send Celia to Queen Mary's court in Edinburgh. She needs someone there who can infiltrate Mary's ladies, and someone she can trust. It is suspected that Mary wants to remarry, and her cousin's choice of husband could change the balance of power between England, Spain, and France. Celia, who the queen has noticed is very observant, can send information about whom she thinks Mary plans to marry. She can travel to Edinburgh with Lord Darnley, son of the Countess of Lennox, someone with as good a claim to Elizabeth's throne as her cousin Mary. In return, Elizabeth will find Celia a husband when she comes back to Elizabeth, and then Celia learns her contact will be none other than John Brandon.

John Brandon still loves Celia, but he has a terrible secret he knows would destroy any chance of Celia returning his love. Acting as escort for Lord Darnley, he frequently encounters Celia and quickly learns his mind can't control his body and heart's reactions to her. The trip to Scotland is quite eventful and dangerous, as is the relatively short stay in Mary's court, but Celia leaves Scotland without John.

In TARNISHED ROSE OF THE COURT, author Amanda McCabe depicts the different court atmospheres very aptly as each is influenced by its queen. She also reveals Elizabeth's and Mary's characters interestingly, showing how each queen's past influences her rule. Both courts are filled with intrigue, yet historical events play mostly outside the action between Celia and John. Their attraction leads to many hot sexual encounters, but Celia is a woman whose strength has grown through many personal and family tragedies that have left scars on her heart and soul. She keeps her own council. John also has an interesting past that haunts him. Like Elizabeth and Mary, neither Celia nor John can trust the other, so the suspense, even through all the sex, builds with the question of how this relationship can ever conclude. This drama will keep readers turning pages.