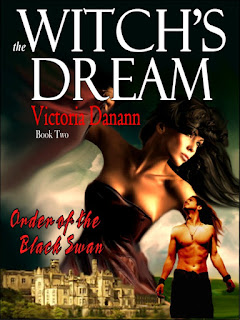 The Witch's Dream is the second book in my series, The Order of the Black Swan, and it releases this Sunday, October 14th, in print and ebook on Amazon.com. This is paranormal romance, heavy on the romance. It's not paranormal mystery, or thriller, or suspense. It's romance with paranormal elements that allow me to expand the fantasy.
Unlike the first book, which could be read as a stand alone novel, this book draws heavily on characters and situations presented in My Familiar Stranger. All the readers who have been begging to hear more about this character or that are going to get some satisfaction.
Anyone who hasn't already read the first book in the series, My Familiar Stranger, will get have a chance to download it for FREE at Amazon on Saturday, the 13th. We'll also be hosting a RELEASE DAY PARTY on Facebook with discount coupons and instructions on how to get a gorgeous "World of Black Swan" mousepad.

2.  Can you tell us a little one of your favorite scenes in the story?

There is one that I can mention without spoilers. The recently cured six-hundred-year-old vampire, Istvan Baka, who is devastatingly seductive and, Sir Kay, a berserker who is one of Black Swan's modern day knights are having an exchange about Baka's womanizing. This takes place at Rammel Hawking's ancestral home in Derry, Ireland where everyone, including family and friends, are gathered for a celebration. The associates of Black Swan are finding that, when they're together, it's more difficult than usual to hide their identities from people who don't know that they are employed by an ancient secret society of vampire hunters and paranormal investigators. The family in question in this scene are Kay's three sisters (a.k.a. the Norns) and Ram's sister, Aelsong.

In mid afternoon Kay was making his way toward the library bar to see if somebody might be up for a game of cards when he heard Dandie, his sister the firebrand, shouting. He rounded the corner just in time to hear her finishing up a tirade. "Get the hell away from me or my brother is gonna kick your ass."
"Whose ass am I kicking now?" Kay asked calmly as he entered the room to find her staring at Baka with hands on hips.
She motioned toward Baka. "This player thinks he's got a shot at sleeping his way through the Norns. Just last night he was in somebody else's bed and now he's putting moves on me." Smirking at Baka, she said, "Credits for stamina - maybe. Debits for sleaze."
Kay looked at Baka who shrugged and smiled innocently as he walked behind the bar. "I'm making up for lost time." Turning toward Dandie, he said, "Yesterday's lady and I had an understanding."
"No doubt." Kay leveled a meaningful look at Baka. "You need to find something else to occupy your time."
"That's it?" Dandie was incensed. "You're letting him off with a warning?" She shook her head at Kay reprovingly. "Wow. That government job has made you soft, Bubba."
In the middle of pouring a whiskey, Baka stopped at that to bark out a laugh. He turned to Dandie and appeared to agree with her. "That's exactly what I've been saying! Kay, you and those other people you work with are simply too soft." He shook his head as he poured Scotch over ice. "God in heaven you people are fun." He held the bottle up toward Kay in a gesture that asked, "How about you?"
Kay ignored him and looked at his sister. "Dan, that vampire and I have been through a lot together."
She looked blank. After a few blinks she drew her brows together. "Vampire?"
Kay paled a little when he realized he'd slipped. He looked at Baka who grinned brightly and raised his glass as if to say, "Cheers," before bringing it to his perfectly chiseled lips.
Kay stared at Baka for a moment before finally deciding what to say. "It's an inside joke."
Dandie turned to Baka as if to get confirmation. He waved the glass in his hand toward Kay. "Indeed. Nothing quite says funny like vampire."
Dandie considered that for a moment, stepped closer to Baka and said, "Come near me again and I'll kick your ass myself."
In response Baka gave her his best sardonic smile and rubbed a forefinger in his ear. "I'm sorry. Did you say kick or lick?"
Dandie's eyes grew impossibly wide and her face reddened making it look like she might spontaneously combust.
Baka seemed intrigued by the demonstration and watched with interest. "Kay, my friend, do your sisters berserk as well?" Kay stepped in front of the ex-vampire. "Never mind. That was a silly question. Given the right circumstances all women berserk."
Kay advanced with a more threatening tone. "Baka..."
"Alright. Alright. I'm going." Baka looked around like he'd lost something. "Has anybody seen Aelsong?"
Kay, who had turned toward his sister, gritted his teeth and wheeled around like a parent who'd been pushed too far. "Baka! Give. It. A. Rest. Everybody's sisters are off limits. Am I making myself clear?"
"Kay," Baka chuckled, "most women are somebody's sister."
Kay took a step forward in an aggressive mannerism that was universally understood as provocation-gone-too-far. The fact that it was out of character for Kay was a little alarming. So, in an unprecedented display of good judgment, Baka set his glass down, held up his hands and began backing toward the door.
Having witnessed the entire scene without saying a word, Squoozie now hurried out the door after Baka. When she caught up to him, they were still close enough for Kay and Dandie to hear their sister say, "My baby brother doesn't speak for me, Baka. I'm sure Aelsong is busy right now. But I'm not."

It never fails to surprise me when I start out with one thing in mind and end up in a different direction because the characters impose their will on my keyboard. It's a phenomenon that will never become tiresome and remain perpetually fascinating.

I never make any secret of the fact that I chose to write Paranormal Romance because of Kresley Cole whom I call The Great Kresley. Before I started writing I spent two years digesting every paranormal romance that had enjoyed any success to speak of so that I would know what had already been done. In that sense, I've been influenced by everybody, but I would like to be respected like Karen Marie Moning, loved like Kresley Cole, and clamored after like J.R. Ward.

5.  What does your family think about your career as a published author?
There are three who count: a husband and two daughters. They love it.

I still author and illustrate Seasons of the Witch every year for 7th House and that consumes a chunk of time. My Classic Rock band is on hiatus right now, but, when we're playing, it takes a lot of my time. I'm the utility player which means I play keyboards, rhythm guitar, sing back ups, and a few leads. I also manage one Houston's premier party/variety band. I play Masters level bridge and exercise on the trails every day with my Doberwoman.

7.  Can you tell us about what’s coming up next for you writing wise?

I'm currently working on Baka's story, the third book in the series, The Summoner's Tale to be released Valentines' Day, February 14, 2013 in print and ebook. At the same time I'm plugging tidbits into the outline for the fourth and fifth books.

For the past thirteen years, Victoria has illustrated and authored Seasons of the Witch calendars and planners.

Though works of fiction are a departure for her, she has had this series simmering on the back burner of her mind for years. In addition to authoring and illustrating Seasons of the Witch, she plays rock music and manages one of Houston's premier R&B/Variety/Pop bands.

This series will eventually include some of my actual experience in the paranormal with fictionalized anecdotes from my journals during the years when I was a practicing "metaphysician", but most of the material is fantasy - of course,