Q & A with Danica Winters! 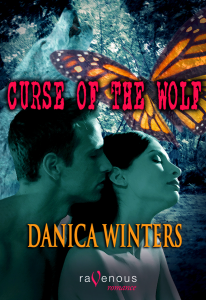 Earlier this summer my award winning debut novel, Curse of the Wolf was released by Ravenous Romance as an e-book and this August, it was also released in paperback.
For cursed, shape-shifting Veela, Gloriana, following her heart and giving her body to sexy, tortured werewolf Alexander means one thing-he will die and it will again be her fault.
Once only a man, Alexander finds himself scarred by the memories of his former life and the deceptions and lies that surround him. When a glimmer of light breaks the madness, he must let go of his misguided preconceptions and the hatred that consumes him.
On a mission for blood, they find unity in their desire for revenge, but are driven apart by their pasts. Traveling the darkest paths and fighting the very people they think they can trust, they draw closer to one another's hearts and further into danger.
Will the curse prove to be unstoppable... or is there hope in forbidden love?

I have a few favorite scenes throughout the book, but the one that is coming to mind as we talk is towards the end of the novel (no spoiler) when she meets the antagonist, Archimago.  The group is standing in the gardens of Babylon-like estate of the protagonist.  Where, all of a sudden, everything Gloriana though she knew is called into question. It’s a beautiful juxtaposition between dark and light, good and evil.

I love doing research.  For this book, I worked with Sir Edmund Spenser’s, The Faerie Queene and Giacomo Puccini’s, Madame Butterfly to find inspiration.  I had never read either, so it was a mind expanding journey.
Also, I had only heard of Veelas from Harry Potter’s Fleur Delacour (but this is not where I got the idea for using Veelas).  When I found them as I was researching concept ideas, I had that illusive spark of “Wow, these characters are great!”  And I had to write the book.

The biggest influence I initially had was Charlaine Harris.   I loved to write before I read her work, but I liked the way she kept paranormal characters in a real world setting.  I have a hard time reading books that are so wrapped in paranormal lore and settings that they are closer to science fiction (though there are exceptions to the rule—I love dystopia fiction).
Once I began writing, I happened upon a group of local writers and they quickly became some of my closest friends and greatest allies.

My family and friends are very supportive.  I don’t think I could do it without them.

I am an active outdoorsman.   I love hiking and playing outside, though I admit I don’t like tent camping as I’m terrified of bears.  I’ve had too many experiences with black bears to feel comfortable camping.  Though strangely enough, I have lived in tents for extended periods of time (I am a trained archeologist).

7.  Can you tell us about what’s coming up next for you writing wise?

I have a novella coming out this fall entitled, The Vampire’s Hope.  It’s similar to P.C. Cast’s House of Night Series except it is geared for adult paranormal romance readers instead of young adult.
This winter, I have a novel entitled Secrets of the Labyrinth being published by Crimson Romance.  In which the shape-shifting Veela, Ariadne Papadakis, is ordered to stop the American archeologist, Beau Morris and his delinquent son, Kaden, from exposing the Sisterhood of Epione and the Labyrinth of Minotaur fame.  As she comes to know the pair of men, her dedication to her Sisterhood comes into question and she is forced to make a decision between her head and her heart.  Can she have the man she loves or will the pressures and secrets of her past be too much for her to handle?
I have also begun work on the next two Veela novels.

I am most active on my Facebook page.  I routinely have naming contests as well as free book giveaways.

Thank you so much for having me on your blog today.  I enjoyed sharing.  Happy Reading!

***Danica is having a giveaway. Readers must ‘like’ her Facebook page for a chance to win an e-book copy of Curse of the Wolf.***

Author Bio: Danica Winters is an Amazon best-selling romance author based in Montana. She is known for writing award-winning books that grip readers with their ability to drive emotion through suspense and often a touch of magic. She is a member of Romance Writers of America, Montana Romance Writers, and Greater Seattle Romance Writers. She is a contributor to magazines, websites, and news organizations. She enjoys spending time with friends and family, the outdoors, and the bliss brought by the printed word.