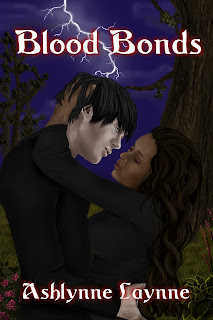 “Forever. For always. For eternity.”

The ties that bind two hearts are powerful. For Ascher Rousseau and Shauna McCutchin, it’s more than just a blood bond. Their union is that of vampire legend. Their love is a predestined prophecy foretold centuries ago.

It’s a week before Ascher and Shauna's sealing and the couple is making final preparations for their eternity. But Ascher's ex has other plans. Ursula is hell-bent on revenge—revenge fueled by lover's scorn and her father's death—and she begins breeding a fresh army of newborn darklings to do her bidding.

When Ursula finds a new weapon—an ally with the capability to dismantle the Rousseau clan— Ascher and Shauna's bond is tested and they must stand together against Ursula or lose each other for eternity.

About Ashlynne:
Ashlynne Laynne has always had a soft spot in her heart for vampires but grew tired of the garlic fearing, sun-loathing creatures of old. An avid horror movie fan, she tends to enjoy media and music that is of a younger, more eclectic nature. This was the catalyst for her writing The Progeny. The vampire/witch pairing is unique and different when most books pair vampires with werewolves.

Ashlynne loves writing on the edge and teetering between the erotica and romance genres, and thinks of Ascher and Shauna as the wicked, damned version of Romeo and Juliet. She is currently working on books three and four of her Progeny Series, book one of her upcoming Rocker Series, and an untitled novella WIP. In her spare time, she enjoys cooking, reading and spending time with her family. She juggles the hats of wife, mother, full time employee and part-time writer, hoping to write full time one day soon.

Ashlynne lives in North Carolina with her husband and teenage son.

About The Progeny Series

At its core, The Progeny is simply a story about a man and woman who fall in love, and the fact that he’s a half-blood (half-human, half vampire) and she’s a Wiccan human are secondary factors. When we meet Ascher, he’s grumpy. Frankly, who could blame him? He’s engaged to seal to Ursula—a cold and careless vampire who wants nothing more than to get her hands on a bloodstone— and he feels conflicted about his existence.

All of that changes when he meets Shawnette McCutchin. She’s beautiful, intriguing and possesses some of the most potent blood that he’s ever smelled. A war immediately begins inside Ascher. He craves Shauna’s blood just as much as he craves her body and the closer they get, the harder it is for him to control his urges. After Ascher calls off the sealing to Ursula, the trouble begins. His family’s peaceful period ends when Ursula’s army attacks the Rousseaus.

This series is about a family of which we’ve never seen before. They share a common mortal and immortal bloodline but loyalty is the thread that holds this clan together. Once you become a part of this family, the others will risk their lives to protect you. We see examples of this throughout the journey. There is no shortage of romance, steam and surprises in The Progeny Series but these books are for adults and contain adult sensuality, language and themes.
Book one of the Progeny Series—The Progeny—re-released on May 7, 2012. The “revamp” is a second edition full of extended scenes, new details and tighter editing. Book two—Blood Bonds—will release summer of 2012.

<<<<>>>>
Excerpt From the Upcoming Blood Bonds:
Ascher and Shauna sat facing one another, hands clasped, their gazes locked and searching for the undying devotion and love in each other’s eyes. He leaned into her, drawing her into his embrace, inhaling the sweetness of her hair—one of his favorite past times. The new information had to be disconcerting for her. His life had been one prophecy or prediction after another.
He spent much of his existence minding the covenants and adhering to a prophecy that turned out to be false. Quickening was the only proof he needed to affirm his decision. Anything else was an afterthought and he’d treat it as such. “You’re quiet. Are you okay? Do you need someone to check you out?” he whispered, pulling her tighter to gauge her pulse and breathing.
Shauna sighed heavily, snuggling closer to him. “Can Zion be trusted? Klaus professed a false prophecy. Who says this isn’t one, as well?”
He knew she was overwhelmed by everything—the prophecy, the sealing, their wedding.  “Imagine how I feel. This is the second time someone has placed a sealing prophecy on my shoulders. I don’t know if it’s true and I don’t care, because no one can dictate to me what’s in my heart.”
“Which is?”
“That you’re the perfect one for me always, until the end of eternity and I don’t need some ancient prediction to tell me that.”
Their intense glances met and he saw the uncertainty burning back at him from her eyes.
“Something else is wrong. What is it, Shauna?”
She stared down, twisting her fingers together in her lap.
Placing a comforting hand against her face, he lifted her chin up to meet his gaze. “Eyes up,” he whispered. “What is it, really?”
“I had a bad dream last night,” Shauna managed to squeak out.
“About?”
“The baby.”
Ascher knew she still dreamed of the baby that would never be. He often thought of him, too, wondering what Shauna would look like swollen with pregnancy, or what the child might have looked like. Once or twice, he’d even dreamed of a precious little angel with jet-black hair, a flushed, tanned complexion and the most beautiful dark eyes. He’d hold on to that image until he held a baby in his arms to complete it.
“If I had not miscarried, I’d be showing by now.” She trailed her hand across her flat stomach as the tears spilled over in her eyes.
Ascher grabbed her, holding her to him as the grief vibrated throughout her body. “It’s okay,” he whispered in her ear. “It’s okay to be sad, love.”
“Sometimes I feel so empty and it hurts me so much, Ash,” she cried, while nudging her face against his gray sweater. “I think about the baby every day, wondering if I could have done anything different. I had to save my sister; I couldn’t let Ursula kill her.”
He set her away from him. “Shhh...Sweetheart,” he breathed, shaking his head as he placed a silencing finger across her lips. “What happened was not your fault. We’ve been over this before.” He stroked her cheek with his thumbs to wipe the tears from her weary face.
Ascher gazed into her sorrowful eyes and saw the raw emotion reflecting from them. He imagined that if he were able to cry he’d have cried a river over their loss. Sometimes, he wished he could cry to release some of the rage that he held pinned inside of him. Losing that baby cut him deep, like a knife slicing his heart into millions of pieces. He didn’t know anything could ever wound him so much, and yet the only thing that could hurt him more would be the loss of Shauna.
Ursula had it coming for her part in their misery. That bitch was on borrowed time and the payback hourglass was almost empty. He shoved down the growl begging to surface from his depths, until it rumbled and burned hot in his belly. Ascher embraced Shauna again, strumming his fingers through her hair and thinking about his revenge. The telltale pulsing deep inside him finally made it to his eyes, tinting the lush green landscape blood red with his ire. He would get satisfaction for the shedding of Rousseau blood.
A wave of sadness crested within him and replaced the anger, sweeping through him like an emotional tidal wave. He held her tighter to comfort her and to hide the rage burning in his eyes, as his right hand joined hers to caress her vacant stomach. They sat seeking the comfort of one another’s embrace, the only sounds their breathing and Shauna’s muffled cries against his chest as the warm wind rustled in the trees surrounding them.
When the crimson left his sight, he brought his hand under her chin lifting her face to meet his heavyhearted gaze. Placing his hand over her stomach again, he whispered, “We will make another life, Shauna, when you’re ready.”