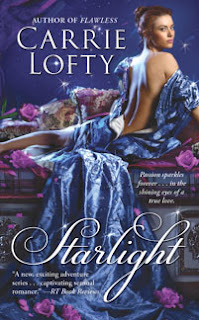 
Esteemed astronomer Alex Christie, the eldest and most steadfast of the Christie siblings, has never possessed his late father's ruthless business drive. But to protect his frail infant son from his cruel father-in-law's bid for custody, the young widower must undertake Sir William Christie's posthumous million-dollar challenge: to make a Glasgow cotton mill profitable. At sea in an industrial world of sabotage and union agitation, Alex meets Polly Gowan, daughter of a famed union leader, who hopes to seize a mysterious saboteur without involving the police.

Because a sympathetic mill master would aid her cause, Polly becomes Alex's guide to urban Scotland. From soccer games to pub brawls, Alex sees another side of life, and feels free for the first time to reveal the man--vital and strong--behind his intellectual exterior. Polly is utterly seduced. Their ambitions, however, remains at odds: Alex vows to earn the mill bonus to save his child, while Polly fights for the needs of her people. Is there strength enough in their sparkling passion to bind them together in their quests--and in a lasting love that conquers all?

Alexander Christie is lured to Glasgow from New York with the promise of one million dollars by taking over his father's business for two years and making it a success.  His wife recently died in childbirth, which leaves him with his sickly child, Edmund, whom he wants to remove from any contact with the baby's abusive maternal grandfather.  He finds many problems with Christie Textiles in Glasgow with much discontent among the workers.  When an explosion and fire take out part of his mill, he calls in some of the union trouble makers.  He finds that his workers are underpaid and over worked, barely making enough to survive, but he is warned by the other mill owners to not give in to their demands.

Polly Gowan is a weaver at Christie Textiles and is trying to help her father protect the people and get better working conditions.  Rand Livingstone is her nemesis, always fighting against her and the other union members.  Alex meets the fiery Polly, and electricity fills the air between them.  Polly is voted to head the union for peaceful negotiation.  She tries to convert Alex to her views rather than his siding with the other mill owners.  More fires erupt in the business district with the union blamed, but who is really starting the fires and why? Violence is close at hand.

STARLIGHT takes place in Glasgow, one of the largest and most industrial cities in the world in 1881.  The people eke out a living at the docks and mills as the city hums with life.  They live in one room shacks and tenements with few comforts.  It is a rough and tumble world.  Not often does love flourish between the classes.  Polly is an independent and strong woman, and although Alex is determined to build a future for his son, his passion for Polly cannot be denied.  Both characters are likeable, and the story moves along at a good pace with a sizzling romance.

STARLIGHT is not a light-hearted story.  Both Polly and Alex must fight for their love and what is right.  Violence is always close to the union members as they try to survive in very rough living and working conditions.  Friendship and family are paramount to their lives.  Ms. Lofty writes a compelling story with DIVA, book three of The Christies , to follow.

I've never read Carrie Lofty's books. Sounds like I've been missing something here. Thanks for the giveaway.

I would love to win it.

This book at me from "Glasgow, Scotland". Home of my maternal grandfather....
would love to win this book. Carrie Lofty is a new to me author..

I have read her previous book, What a Scoundrel Wants, and loved it. I would so love to win Starlight. I makes me feel like it's something I'd adore.

Definitely count me in. Thanks for the giveaway.

I would like to read this! It takes place in a unique setting for me and I like the storyline.

Have not read her yet!! Sounds amazing and I'd love to be entered to win. Thanks for the chance.

No need to include me, but just wanted to say that Starlight was a fantastic read, and if you haven't read the others in the Christies series so far, don't delay--pick up Flawless and her novella (A Little More Scandal) about their parents, William and Catrin. Really excellent!

I haven't read any of her books yet bit like to read books that are so highly recommended. We had a lot of union rights taken away here in Wisconsin. Things are very unsettled here politically.

As my daughter and a niece are teachers, I was a nurse as is another niece, my brother in law and nephew are fire fighters, and my sister-in law and another nephew are teachers ...
My family is very effected by this decision.

I would love to try a Carrie Lofty book. It's been awhile since I've read a historical. Thanks for the giveaway.

Thanks for the great review. This book sounds fantastic. Can't wait to read it. Carrie is a new author to me.

Would love to be entered, thanks for the giveaway!