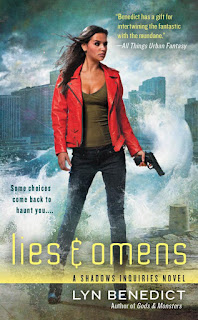 Sylvie Lightner is a P.I. specializing in the unusual—in a world where magic is real, and Hell is just around the corner.
After escaping secret government cells and destroying a Miami landmark, Sylvie’s trying to lay low—something that gets easier when a magical force starts taking out her enemies. But these magical attacks are a risk to bystanders, and Sylvie can’t let that slide.
When the war between the government and the magical world threatens the three people closest to her—her assistant, her sister, and her lover—Sylvie has no choice but to get involved with hidden powers bent on shaping the world to their liking. Now, with death and disaster on the horizon, even if Sylvie wins, things will never be the same...
Please post once to be entered. Open to US and Canada mailing addresses only.
Good luck!
at June 10, 2012

I'm not familiar with this author or series. It really sounds great and I'd love to be entered to win. Thanks for the chance.

Have not read this author.

Sylvie's life sounds exciting because she's not only a P.I. but deals with magic.

The story sounds interesting. Hopefully the book can be read without having read the previous three.