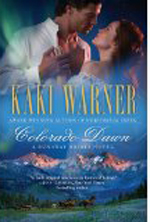 Maddie Wallace hasn't seen her husband in four years and received all of two letters from him; he left her in Scotland with his family and returned to duty as a cavalry officer. The Wallace family never really approved of Angus's English bride, so when Maddie went back to England to bury her parents, she didn't want to return to their unwelcoming home. Maddie's passion is photography, and she was lucky enough to find a job with The Illustrated London News . The paper sent her to America to photograph the Wild West from a “woman's perspective.” After the sea voyage and the overland train ride, Maddie settled in the fading mining town of Heartbreak Creek, along with three other ladies she met on the train. Maddie travels the area by wagon accompanied by the elderly Mr. Satterwhite, sometimes known as Wall-eyed Willie. She has begun to make a name for herself with the photos she sends back to London .

Meanwhile, Angus's father and a brother die, leaving him heir to his remaining—and ailing—brother. Angus now carries the courtesy title of Viscount Ashby and is close to becoming Earl of Kirkwell. Always a dutiful sort, Angus decides he must find his wife and produce an heir of his own to safeguard the family legacy. He traces Maddie to Heartbreak Creek where his inquiries are met with a tough inquisition from her friends.

To give Angus his due, there are reasons for his neglect of Maddie, some of them injuries suffered in battle, and one a secret he's ashamed to reveal to anyone. His feelings for her come rushing back when they meet. Maddie is not indifferent to him, either, but she has never been happier with life than now…the freedom, the beauty of the territory and its stunning variety of light that so inspires her artistry. Angus doesn't really want the title, but duty calls loud and clear. Maddie would like to make a family with Angus but she doesn't want to give up her life in Colorado . Where does their marriage go from here?

The characterization is very well done. Maddie's inherent strength emerges as she is tested through loss and danger. Can a hard-headed soldier make compromises when he falls deeper in love with his woman? The rest of the cast are equally as well drawn; we've met most of them in the excellent HEARTBREAK CREEK, volume one in the Runaway Brides series. Rancher and temporary sheriff Declan Brodie appears with his four still wild children and his mail order bride, Edwina. Then there are Edwina's half-sister, former slave Prudence Lincoln, and the man who would like to “own” her, Thomas Redstone, a Cheyenne Dog Soldier. Several amusing scenes take place among the three so very masculine males, Angus, Declan, and Thomas. One would have to search far and wide for more alpha men; good thing they also have peaceful sides to their natures.

Many minor characters fill out the plot and add to the enjoyment, including Angus's faithful Irish wolfhound Tricks, and his deaf warhorse Lurch. A young man named Silas will mist many readers' eyes. And, oh, dear, I've left out hotel owner and woman of some mystery, former New Yorker Lucinda Hathaway. Luckily, she stars in the next Runaway Bride episode, BRIDE OF THE HIGH COUNTRY, coming soon.

I can't recommend both books highly enough with their emotion, humor, suspense, and all around great writing. Guess I'll give COLORADO DAWN a Perfect 10. J