Guest Blogger and Giveaway: The Grand Canyon by Kristy McCaffrey 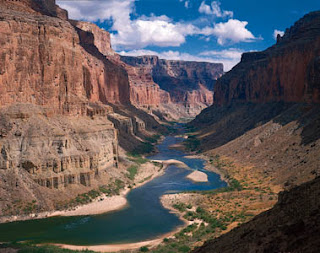 Grand Canyon National Park is known for its overwhelming size and its intricate and colorful landscape. Over time, the elements have scoured and carved the dramatically splendid Grand Canyon, known as one of the world’s seven natural wonders. The distance from the South Rim to the North Rim varies from half a mile to eighteen miles, and the canyon has a maximum depth of 6,000 feet. This great range in elevation allows for a variety of climate, flora, and fauna; of the seven life zones on the North American continent, four can be experienced within Grand Canyon.


The first documented expedition of the Colorado River through the Grand Canyon was accomplished by Major John Wesley Powell in 1869. Powell, a Civil War veteran with only one arm, and nine companions became the first men to journey 1,000 miles on the river, part of it through Grand Canyon. They braved rapids, heat, plummeting morale, and the loss of three men. Powell’s account of this expedition, Exploration of the Colorado River of the West and Its Tributaries, made him a national hero as well as brought the canyon to the attention of the country. The Paiutes called the plateau that the canyon cuts through ”Kaibab” or “Mountain Lying Down,” but it was Powell who first consistently used and published the name “Grand Canyon” in the 1870’s.

The Colorado River, meaning “red” in Spanish, was named in 1776 by a Spanish missionary, Padre Francisco Tomás Garcés. It was a description of the brown, muddy river at the time. However, since the construction of Glen Canyon Dam in 1964 the river is now clear, clean, and cold.

The river begins as a tiny stream in Rocky Mountain National Park, eventually flowing into Lake Powell, formed by the Glen Canyon Dam. Below the dam it begins its journey through Marble Canyon by joining with the Paria River. At the confluence of the Little Colorado River does the Colorado finally enter Grand Canyon National Park, flowing 217 miles until it reaches Lake Mead Recreation Area.

One of the most colorful characters in Grand Canyon history was Captain John Hance. Born in 1840, he served in both the Confederate and Union armies and is thought to be the first non-Native American resident of the Grand Canyon. Arriving in 1883 he first attempted mining asbestos, but failed due to the expense of removing it from the canyon. He soon started giving tours, opening the first tourist trail in the Canyon in the late nineteenth century. He’s credited with carving a number of trails which often followed old American Indian paths.

John Hance loved the canyon and remained until his death in 1919. In his memory there’s a Hance Trail, Hance Creek, Hance Canyon, Hance Spring, Hance Mine, Hance Rapid, and a Hance’s Cove. He was famous throughout Arizona for his tall tales. In one, he stated that the Colorado River got so muddy that the only way to quench his thirst was to cut a piece of water off and chew it.

Kristy McCaffrey’s newest book, THE SPARROW, was released in December 2011. Join Emma Hart as she guides a wooden dory on the Colorado River through Grand Canyon in 1877, accompanied by Texas Ranger Nathan Blackmore. Visit Kristy’s website at http://www.kristymccaffrey.com/ for more info.
Kristy is going to give away to one lucky poster an e-book copy of her first release THE WREN (historical western romance). Please post your comments and questions in the comments section.
Author Bio: 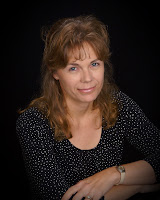 Kristy McCaffrey has been writing since she was very young, but it wasn’t until she was a stay-at-home mom that she considered becoming published. A fascination with science led her to earn two engineering degrees—she did her undergraduate work at Arizona State University and her graduate studies at the University of Pittsburgh—but storytelling was always her favorite hobby. Born and raised in Arizona, and recently returned after a 20 year absence in Pittsburgh, she writes Old West romances to capture the landscapes that were such a big part of her childhood. Her first novel The Wren was a CAPA winner for best new author traditional, a Texas Gold finalist, and a HOLT Medallion finalist for best first book. She lives in Scottsdale, Arizona with her husband, four children, and two chocolate labs, Ranger and Lily. Visit her online at www.kristymccaffrey.com.
at January 22, 2012

I have always wanted to visit the Grand Canyon, maybe some day!! Fascinating article. Really enjoyed it. I'd love to win a copy of your book, it sounds really great.

Your book reminds me a bit of the movie, How the West was Won.. The family goes down a raft on the Colorado River and how some survived and some did not...
I would love to see it in person someday..