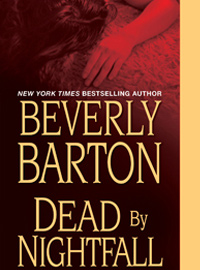 DEAD BY NIGHTFALL by Beverly Barton
Out now!


Malcolm York is a sadistic monster, guilty of unspeakable crimes. And with his endless wealth he's funded a series of depraved hunts. The few who survived can never forget. They can only be thankful the terror is over. Until rumors start swirling. . .


Griffin Powell knows the twisted depths of York's madness. He's also sure that York is dead. But then Griff's wife, Nicole, disappears and the phone calls begin--that familiar voice taunting him, promising to destroy everything Griff loves.


Using all the resources of the Powell Agency, Griff searches for Nic, aware that every step propels him further into a madman's web. Because the only way to keep Nic safe is to join one last perverse game where winner kills all, and the loser is dead by nightfall. . .

I would love to win this. Count me in. Thanks.

What a terrifying story! I love suspense so this would be perfect for me. I think it could give me nightmares though. LOL

I enjoy the Powell Agency books. Thanks for the giveaway.

Thanks for a chance to win her latest!

Would love to win this book - am always up for a good suspense read.

Sounds great. Thanks for the chance!