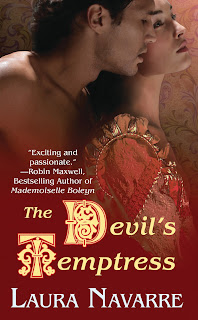 The Devil’s Temptress is a dark and sexy historical romance, set during the Crusades, about a disgraced Muslim knight and an ardent Christian lady at Eleanor of Aquitaine’s court. The Raven is an embittered Crusader, scarred body and soul by a lifetime of war, who seems to embrace dishonor as the Devil of Damascus. Yet despite his public shaming, the disgraced knight has kept his secret honor.

Valiant and principled, Lady Alienore of Lyonstone masquerades in secret as a knight on the tourney field, defending shamed damsels no proper knight will champion. When she’s ordered to wed the infidel Devil of Damascus with his unsavory reputation, Alienore dares to refuse. Before she can be truly free, she must prove her worth to her own greatest skeptic—herself.

The Devil’s Temptress is a 2009 Golden Heart finalist. It’s won the Emily Award for Excellence, the Golden Pen, and several other contests sponsored by the Romance Writers of America.

Well, I have to say I’m quite fond of the opening scene. Alienore has challenged to single combat her cousin’s alleged ravisher, the infidel knight known only as the Raven. The opening scene is the joust between them, and the combat by sword that follows. It’s all clashing blades, thundering hooves, the heat and fury of battle, and the growing question in Alienore’s mind about this enigmatic knight’s identity. Although she’s never seen his face, the Raven realizes he’s fighting a woman behind that concealing armor—and a formidably skilled one. So each of them becomes fascinated by the other.

I’ve always been a scribbler and a voracious reader. I grew up reading L.M. Montgomery’s Anne of Green Gables books and the Laura Ingalls Wilder Little House stories, so historical fiction has always been a passion. I was in fourth grade, I think, when I started getting hold of my babysitter’s Harlequin Presents—all those exotic locales and glamorous alpha heroes and sexy encounters—which started my love affair with the romance genre. I think I tried my hand at writing one in fifth grade.

As a historical author, research is a critical part of my writing process. I write in the medieval, Renaissance, and Tudor periods, so I’ve had to become comfortable inhabiting those worlds. Usually, I have an idea for a hero, and he’s wearing the face of some gorgeous actor I can’t get out of my head. The Raven in Devil’s Temptress is inspired by Michael Wincott, who plays the Spanish villain Moxica in 1492: Conquest of Paradise. Right down to that raspy voice, which in the Raven’s case was damaged by Greek fire in the Crusades. You can check out my inspiration for the Raven here at http://www.michaelwincott.org. Click on the character bar for Moxica—that’s the Raven I see in my head when I write.


A lot of my work as a writer is done before I set pen to paper.  In addition to whatever historical research the book requires, I develop detailed character sketches for my hero, heroine, villain, and significant secondary characters like Eleanor of Aquitaine and King Henry II.  This process typically takes 2-3 months, but it’s critical for me—the entire story springs from what I know about the characters and the world they inhabit.  (For any curious writers out there, I swear by the character profile process in The Plot Thickens by agent Noah Lukeman.)  When I become too impatient with the process to wait any longer, I know it’s time to start writing.
6. What was one of the most surprising things you learned in creating your books?

I learned that King Henry II—the first Plantagenet King of England—was a man of fascinating contrasts: intensely charismatic, but with serious manic qualities and a notoriously hot temper. In Temptress, I try to portray a king who literally never sat down. When his temper exploded, he was known to roll around on the floor in rage and once, reportedly, chewed holes in a pillow in his fury. This was the husband Queen Eleanor defied and championed a rebellion against—apparently without fear! Yet Henry’s personal charm was one of his great assets, and the two were deeply in love for many years.

There’s an intriguing exploration of their relationship in Eleanor of Aquitaine: A Life by Alison Weir, and a fabulous trilogy of novels by Sharon Kay Penman, starting with the book When Christ and His Saints Slept.

I’ve been blessed with extraordinary mentors throughout my career. I must especially credit the Stonecoast MFA program at the University of Southern Maine, which is one of only two MFA programs I know that allows students to earn a Master of Fine Arts degree writing romance. My mentors there were New York Times bestselling author Nancy Holder, and critically-acclaimed suspense author/playwright Michael Kimball. And I’ll always feel a special appreciation for my very first mentor: screenwriter and memoirist Steven Denlinger, who also happens to be my fiancé!

They’re 100% supportive, and always have been. They couldn’t understand why it took me so long to sell that first book. :)

I’m a compulsive traveler, and fortunate to have a “day job” that flies me around the world for various fascinating adventures—including to places few other Americans tend to visit. I’m also into modern art (from post-Impressionism to the color field painters, particularly), ethnic cuisine, good wine and theatre.

I’m working on a dark Tudor romance with a paranormal twist, featuring Bloody Mary Tudor and the fascinating Queen Elizabeth.