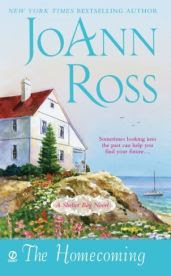 It's hard being the younger brother of a perfect son; perhaps that's why Sax Douchett became something of a rebel. After high school, he joined the Navy and became a SEAL. Now this sexy bad boy is back in town, and the town proclaims him a hero. They are even giving him a welcome-back parade. Sax would just as soon forget his time in Afghanistan...if only the ghosts of his buddies would let him. But he'll go along for his mother's sake. The Douchett family was never short on love.

After losing her husband and then her father, Kara Conway returned to Shelter Bay to take over her father's job as sheriff. She and her eight-year-old son now live with her doctor mother. Not much crime takes place in the sleepy coastal village of Shelter Bay, so an old human bone found on the beach just might prove interesting. And so might its finder, Kara's old friend and schoolmate Sax Douchett, with whom she once made a brief connection.

Sax always had a thing for Kara, but his honor would never let him make a move on a friend's girl, especially when that friend asked him to look after that girl when he and Sax's brother left to join the Marines. Long suppressed yearnings resurface on meeting Kara again. With her son Trey still mourning his father, Kara is wary about letting him get close to someone with Sax's reputation with women.

Kara and Sax share more than their common childhood environment; they both suffer feelings akin to survivor's guilt, though using that label over simplifies their deep and complex emotions. Perhaps they would be good for each other...

JoAnn Ross is an excellent writer. She knows how to create and illuminate characters, major and minor. In THE HOMECOMING, the town comes to life, and Sax's and Kara's backstories are revealed until we know them thoroughly, quirks and all. The book is not short on plot, either. It blends romance and mystery—I should make those words plural as secondary plotlines are woven into the main story—with good humor and suspense.

THE HOMECOMING—a spin-off of the author's High Risk series—is guaranteed to capture and hold onto your imaginations. Fortunately, there is more to come in the Shelter Bay series.

PS ~ You can take a virtual tour of Shelter Bay at this fun website: www.joannross.com.