A Perfect 10:LIFE AS I KNOW IT by Melanie Rose 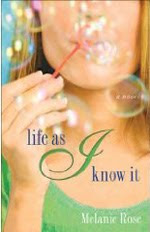 When a walk in the park turns stormy, Jessica Taylor grabs her dog Frankie and ends up huddling on the ground clutching Frankie and another frightened dog while the wind blows wild, rain pelts them, and lightening touches all around. A man comes to claim his dog and offers Jessica and Frankie shelter; they all run for his car. And when lightening strikes again, Jessica suddenly smells her burning flesh and everything goes dark.

Lauren Richardson and her four children, Sophie, Nicole, Toby, and Teddy are in the park. While her children play, Lauren speaks in hushed tones to the man she came to meet. When the wind picks up and the storm begins, there is confusion all around, and as her children watch in horror, Lauren is struck by lightening.

Jessica wakes up in a hospital bed in a private room and finds herself hooked to monitors. The nurse is calling her Mrs. Richardson, and there are pictures drawn in crayon on the walls. Jessica informs the nurse that she has her confused with someone else, but the nurse insists her husband Grant and her four children are waiting to see her. Children? Husband? This is a mistake, but Jessica is tired. All she wants to do is sleep; surely she is having a really weird dream.

Finally, Jessica wakes and finds a different nurse waiting on her. She's not in the private room, but a hospital ward. The man she met in the park is waiting at her bedside. He says his name is Daniel Brennan and he’s holding a large bouquet of sunflowers—her favorite! Ah, so she was only dreaming when she thought she woke up as that Lauren woman. Thank goodness. Jessica does not plan to have kids for years and years...if ever! But she tires quickly. Dan leaves and she sleeps. And wakes again in Lauren's body!

LIFE AS I KNOW IT is the story of Jessica Taylor whose job as a legal secretary is just a stepping-stone on her way up the ladder into the legal system. She has absolutely no plans to marry or have children, but by a twist of fate, or maybe an infraction in time, Jessica finds herself thrown into the life (and body!) of another woman—and she is really "living" that life!

Lauren Richardson is the wife of a wealthy doctor, has four children, and lives a privileged life that is very different from Jessica's. Jessica doesn't want to live someone else's life, but she has no control over what happens. She sleeps, and wakes as Lauren, in Lauren's body, and in bed beside Lauren's husband. After spending the day "pretending" to be Lauren, finally Lauren/Jessica sleeps, which means that Jessica soon opens her eyes, back in her own bed and her own apartment. The only thing Jessica knows for sure is that both she and Lauren were hit by lightening. Somehow, when she wakes as Lauren, she has barely ten hours to live Lauren’s life before sleep claims her and she wakes anew as Jessica. Lauren’s children are happy; all but little Teddy, who knows that Jessica is not his mother, but someone in his mother's body pretending to be her.

This phenomenal story is paced just right and all the threads come together in the end neatly for a satisfying conclusion after many twists and turns. The characters are spot on. Jessica has fallen for Dan, but as time goes on and she has to be in two places at once, it gets hard for her to explain her need to sleep so many hours. Lauren’s husband, Grant, is not the adoring spouse he pretends to be, and Jessica knows she must continue this strange balancing act to protect Lauren’s children. Will Jessica ever get to be herself?

LIFE AS I KNOW IT is the debut novel of author Melanie Rose. This book has an extraordinary history; it was self-published in England and built a huge following of readers when Harper Collins snapped it up. And be glad they did! This book is amazing; you will laugh and cry and remember the story for years to come, and it is definitely a Perfect 10!