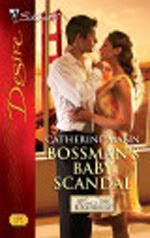 Four months ago, Jason Reagert and Lauren Presley turned their business friendship into something more with a quickie one night in Lauren’s office. They both knew there wasn’t a future between them, as Jason was leaving town to live in San Francisco. Shift to present day, and he’s currently in the midst of a big deal with a client, and any improper actions on his part could make him lose the job. However, he learns from a friend that Lauren is visibly pregnant. There’s no question of his not being the father, and he will do anything to make sure he’s a part of his child’s life. But Lauren isn’t about to change her life in New York City to accommodate his desires.

The months since Jason left have been a tumble of emotions and financial hardship for Lauren. Due to her bad case of morning sickness, she had to take time off from the company she owns, only to learn later that a trusted employee ripped her off. Now on the brink of bankruptcy and the impending birth, she’s at her wit’s end. Then, Jason shows up on her doorstep, demanding that she come with him to San Francisco. Lauren can’t see a future for them, so their spending two weeks together won’t help. But Jason offers Lauren a deal she can’t refuse: in exchange for her coming to California, he’ll give her the money to infuse into her failing business. The attraction is still there between Jason and Lauren. Can she keep him at arm’s length, because to emotionally commit to a man could mean heartache?

Catherine Mann has penned a powerful and emotional tale with BOSSMAN’S BABY SCANDAL. Neither Lauren nor Jason had the perfect childhood, but both managed to rise above it all to be independent and successful. They worked together in New York City and became friends, then one night, things turned passionate. Lauren figured she’d get around to telling Jason about the baby, but with her morning sickness and business problems, time flew. She’s held off telling anyone about her pregnancy for fear she’d lose business, and afraid her family would learn. Then Jason returns and seems bent on forcing Lauren to uproot her life and move to San Francisco, but she has no intention of getting that close to him.

Jason feels the pressure of dealing with a huge client contract and Lauren’s pregnancy. When it becomes clear that he needs to bring Lauren into the fold of his business life, he decides that marriage is the only way to proceed. She resists, of course, which only adds to the tension between them in BOSSMAN’S BABY SCANDAL. Add in the sexual sparks which smolder into an inferno; being under the same roof for this couple makes for some sizzling reading.

Jason and Lauren are an intricate, well-rounded couple who have a lot to work through before they can find their happily-ever-after. Readers will watch as they both grow and change from what they were four months ago into a couple learning to take issues on together. I’m awarding BOSSMAN’S BABY SCANDAL one of RRT’s Perfect 10s because it is a book I hated to see end. Yes, I wanted them happy, but I wanted to see more of Lauren and Jason. They are an interesting and intriguing couple. Since this is the first book in the Kings of the Boardroom series, I’m hoping we’ll see more of Lauren and Jason. If not, maybe Ms. Mann can bring them back in one of her future books. :)

If you had to pick up one book for some pure reading enjoyment, then I highly recommend you make BOSSMAN’S BABY SCANDAL your choice.

Great review!
It just sold another book. Pure reading enjoyment is just what I want.

Nice review. Thanks for the recommendation.