Book Giveaway: BACK IN BLACK by Lori Foster 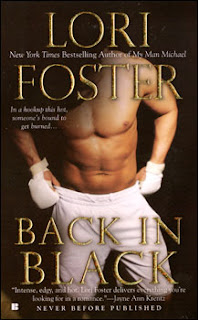 BACK IN BLACK - Lori Foster
Out now!

Blurb:
SBC president Drew Black is as controversial as they come. But the hot-headed entrepreneur is a perfect match for his popular sports club venture: uncompromising and extreme. Maybe too extreme. With a reputation for saying what he thinks, Drew's been causing a lot of friction. That's why someone's been called in to clean up his image—before he does any permanent damage.

The lucky lady is Gillian Noode, a PR expert who's smoothed out the rough edges on many a man. But Drew is rougher than anyone she's ever met, and he refuses to change for any woman, for any reason. To make matters more complicated, Gillian's starting to like him raw. Now, opposites aren't only attracting, they're igniting. But in the rising heat, which one of them will end up on top?

This is the last in Lori's series featuring SBC fighters. Question for readers (and enter to win a copy of this book): What series do you hate to see end?

I have to LOL - someone was telling me yesterday that I need to read this book!

I hate to see Nora Robert's bride series end. I know the last two come out this year. I've really enjoyed these.

Virginia C said...
This comment has been removed by the author.
5:26 AM

Sorry to see Lori's fighters "hang up the gloves"!

Definitely hate to see this series end - have really enjoyed it.
Will probably cry when Suzanne Brockmann ends her Troubleshooters series!

Both this one and S. Brockmann's troubleshooters.

School for Heiresses Series by Sabrina Jeffries. But she is now writing a new series to include the 'left-over' hot guys from the SFH series. Something to look forward to and you just gotta love those left-overs...lol

The two that I will miss the most are Stephanie Plum and The Dark-Hunter series! Their my favorites!

Lori's Fighter series for sure. Also JoAnn Ross's High Risk and her Castlelogh Irish Series and Cindy Gerards Black Ops series and Robyn Carr's Virgin River series come to an end. But we know there are three more to come in this series.. so maybe this doesn't count.. Those are just a few, there are too many other to name.

I am going to duck to avoid being stoned but I was very sad to see the Twilight Series end!

I would be sad to see Sherrilyn Kenyon's Dark-Hunter series end!

I will be sad to see Nalini Psy/Changeling series end. It's my favorite series.

I love Lori Foster books!! I have to get this!

The In Death series by JD Robb!

I would hate to see Lori's SBC Fighters series end. I just finished My Man, Michael so thoroughly enjoyed that I am so looking forward to reading Back In Black.

Say it ain't so, I wouldn't want to see this series end. I'd hate to see the Psy series to end by Nalini Singh.

Please please count me in. I'd love to read this book.

I was sad to see the Harry Potter series end.

Just wanted to toss my hat in the ring. I'm a huge Lori Foster fan

I would hate for the Stephanie Plum novels to end. I know they will have to eventually, but every one makes me laugh.

Gena Showalter's Lords of the Underworld series and Kerrelyn Sparks' Love at Stakes series!! two of my favorites!!

I hated to see Stephanie Laurens' Bastion Club series end, but many of the characters in that series show in her new series.

Totally agree with an eariler comment made. I really hate to see Nora Robert's The Bride Quartet end later this year. Each book gets better and draws you in even more.

There are a couple that I hate to see end:Stephanie Tyler's "Hard to Hold" Trilogy

I would truly hate to see Lauren Dane's Laid Bare, Coming Undone... series stop.. That is an awesome series!
Thank you for the chance to win
alliwantandmorebooks@gmail.com

Each book in a series always leaves me want more. Thst's why I never want them to end. Nora Roberts has had many series that I have read and I dreaded when they ended because I wanted more to read from her.

Hm, I was going to say none of them because I'm rather over series :X
But! I don't want Lisa Kleypas's Travis books to end - there's still a sibling out there who needs to find love!!!! :( And I've been told... he might not get a book.
*sniffle*

There are alot more but I think that is enough for now!

Along with several of those that have already been mentioned.

I just read the other day that Jaci Burton's Demon Hunter series is ending. Bummer! She's an outstanding author.

I'm a sucker for series. I read Merry Gentry and Anita Blake series (though they're rapidly losing my love..), Lynsay Sands' Argeneau series, Jeaniene Frost's Night Huntress series, the Dark-Hunter series by Sherrilyn Kenyon, any and everything by Katie MacAlister, etc. I'd hate for any of those to end! Well, maybe one or two -cough cough-

I love many a series, but the current ones I'm savoring are Larissa Ione's Demonica and Ann Aguirre's Jax series... only a couple more in each... :(

As a voracious reader of all things series I hate to see the end of Kim Harrison's Rachel Morgan series. I am so addicted to my Pixie Jinks and Vamp Ivy that it will be so sad when the books stop coming out every year...

I would hate for the Dark series by Christine Feehan to end.

I would hate for the Dark series by Christine Feehan to end.

I hated to see the Twilight series (by Stephenie Meyers) end.
I would love to be entered in your draw. Thanks.
wandanamgreb(at)gmail(dot)com

I ususlly don't start a series because I never seem to get all of the books. But I did like Susannze Brockman's series.
JOYE
JWIsley(at)aol(dot)com

I'd hate to see Kresley Cole's IAD series end. It's really the only paranormal romance series that I continue to follow.