Spotlight Review: HOLDING OUT FOR A HERO by Ana Leigh 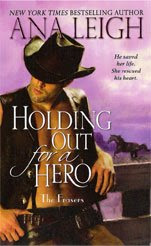 For three years, Rico Fraser has hunted the Slatter gang, the men who raped and murdered his mother. His search led him to Arizona, where he's currently scouting for the U.S. Army. He's much taken with a local rancher's beautiful daughter whom he meets at the fort. It's not mutual, however, for Miss Jennifer Blake rudely lets him know she doesn't approve of "bounty hunters." But shortly thereafter, four men, believed to be the Slatter gang, attack the Burke ranch and take Jenny and her young aunt hostage. Rico and Captain Don Masters --- who insists upon joining Rico --- set out to rescue the ladies. Many believe it's too late to save them from brutality and death. With much difficulty, Rico manages to get both girls and a wounded captain back to safety. Frank Burke then hires him to safeguard his daughter and sister.

HOLDING OUT FOR A HERO has all the excitement one could want in a Western novel, plus a couple of romances. For quite a while, Jenny treats Rico with disdain, but it becomes more difficult as she becomes more attracted to him. Even then, she thinks monetary profit is his sole motive for his heroic deeds. Jenny runs hot and cold; Rico runs hot, but with reservations.

Rico is the cousin of the four Frasers of Fraser Keep, a California winery where the families live and work. He plans to join them one day when he's satisfied his thirst for vengeance. Jenny's mother died at her birth, but she hasn't lacked for love and care...at least from her aunt. Though Andrea is only ten years older, she's a born caregiver, and probably the most likable character in this novel. She's thoroughly spoiled Jenny. Frank Burke is a whole other case. I was torn between thinking his character totally unrealistic and realizing that circumstances can change some people in uncomfortable ways. He's a hard man with an agenda of his own.

There is a lot to like in HOLDING OUT FOR A HERO, and I can recommend it. The plot is intriguing with its suspense over life and death situations and chancy relationships. The romances work, even with a flawed person or two.