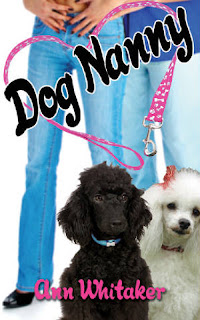 Dog Nanny (which is set for release June 12 from The Wild Rose Press) is about a doggy do-gooder named Julie Shields, who has one month to save two delinquent poodles from becoming doggies of divorce. She’s also a self-proclaimed born-again virgin with a biological clock running out of juice and needs to find a husband for a couple of reasons.

When a hunky pilot named Nick Worthington arrives at the Abilene airport to fly her to Waco, he sends her into a tailspin. But he also may be a drug trafficker and smuggler of illegal aliens. Not only that, he’s involved with another woman.

Julie's quest for a suitable husband leads to several misfires—one disgusting, another downright dangerous. Only Nick leaves her panting for more. Will she have to put a choke chain on him before the month is out?

An underlying theme is the importance of pet adoption, training, spaying, and neutering our pets. I didn’t consciously set out to write a lesson in dog-rearing. Those parts of the story are the result of my interest in dogs and living with and training my own two poodles, both of whom are now senior citizens. If I could only sign them up for Medicare benefits!

By the way, all the tricks mentioned in Dog Nanny, except one, are tricks both my dogs have mastered. But then, they’re poodles. And as I like to say, poodles are so intelligent they make their owners look smart.

I’ve always written. I wrote letters when I was a young child. I began writing poetry in high school. I later wrote newsletters, freelance reviews and stories for newspapers, and poetry and articles for magazines and journals. And I’m notorious for writing lengthy, stream-of-consciousness e-mails.

I’m also a former high school and college English teacher, so I’ve always read a lot of fiction, but I never thought of writing a novel until I finished my master’s degree and offhandedly asked my husband what I should do next. When he said write a novel, I balked at first. But since I can’t pass up a challenge, I decided to give it a try. And I’m still doing it. Dog Nanny is my fourth out of five novel manuscripts.

Everywhere. My own experiences or those of friends. Snatches of conversations overheard in restaurants. Something I see on TV or read in a magazine. For years I’ve collected bizarre stories from the newspaper. I keep paper and pens in every room of the house to jot down ideas as they come to me. I’ve been known to wake up in the middle of the night and write a line or two so I won’t forget it.

So far, I’ve set all my books in modern times in the parts of Texas I know, because I feel I’m capturing a time and place that will never exist again. For example, I have a manuscript I wrote in the late 1980s, during the oil boom and bust in Texas. Reading it now is like revisiting a wild and crazy part of my past.

Unfortunately, like some writers, I don’t have all kinds of plots racing around in my head. I start with a character and then really have to work at plotting. I always know how the story will end. But I may not know exactly what’s going to happen along the way. And sometimes the story takes a turn I wasn’t expecting.

It’s more curse than quirk. I have to be alone to write, preferably in a small room with the door shut, and I need quiet. I’ve been this way ever since I can remember. Possibly because as an only child whose parents both worked, I spent a lot of time alone. I envy those writers who can write at Starbucks or in a newsroom or with small children to tend to. I need solitude and quiet to concentrate. And I need a sense of order around me. Bed made, dishes in the dishwasher, desk cleared of clutter… And I have to know I have several hours of uninterrupted time.

For some reason, my fiction is stronger and more natural when I write in first person point of view. Maybe it’s all those long letters and e-mails. With first person I feel as if I’m telling a story to a good friend.

I’ve also learned interesting characters have to feel passionately about something and have to fight for their beliefs. In my own life, I try to avoid conflict and confrontational situations. So when I’m writing a scene, I often have my characters do the exact opposite of what I would do. For example, I would never talk back to a law enforcement officer, as Julie does in Dog Nanny.

My husband, a journalist and editor, has always encouraged me to write. In fact, in a roundabout way, we met because of something I’d written.

My longtime friend, Gwen, has always supported me. She even read my first manuscript and was kind enough not to tell me it stunk. And it really did. My friend Nikki read a later work and told me her husband made her stop because her laughter was shaking the bed and keeping him awake. Most writers can use all the positive reinforcement they can get, so I’ve been lucky in that regard.

Now that I’ve strayed from writing women’s fiction into the world of romance, my RWA Elements critique group has been invaluable. I couldn’t have asked for better support, constructive criticism, and sometimes off-the-wall conversations that make me laugh out loud and have even give me ideas for stories.

My voice and humor has probably been influenced by modern writers like Sarah Bird, Billie Letts, Sue Grafton, and Nora Ephron, since my female protagonists come often come across as slightly feisty and flippant.

But my writing rhythms and sense of sound go back further to writers like Shakespeare, Poe, and southern fiction writers like Eudora Welty and Flannery O’Connor. And my own background of writing poetry.

They’re all for anything that keeps me out of trouble.

8. What is coming up next for you writing wise?

I’m working on a collection of essays called “Born To Be Fried.” The title comes from a comment my mother once made about chickens. She said, “Don’t you think some things were just born to be fried?”

I’ve also written the first draft of romantic comedy that was a result of a Book-in-a-Week workshop. I call it my book-in-a-week-that-took-twenty-two-days. The working title is Desire Daily. It’s about Mahogany Marsh, a nightside editor for the Desire (Texas) Daily Democrat. When she loses a promotion to a good-looking Yankee with Kennedy hair, she thinks she’s getting even by reducing him to hero-fodder for her romance novel-in-progress. But who will get the last word?

Thank you so much for having me here. I’d love to hear from readers. They can reach me at the addresses below:

Hi Ann!
Great interview :) And something else we have in common---I like the total clutter-free solitude when I write as well. And I also like to know I've got completely uninterrupted time ahead of me.

Dog Nanny will have you laughing out loud! Just wonderfully written...very witty and funny!

Ann, your interview is wonderful - filled with life and fun!

I know your voice will permeate throughout DOG NANNY, and I know I'm gonna love the book!

Your mom's line: some things are born to be fried? Rolling on the floor!

Have a marvelous weekend!