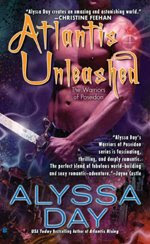 Atlantean Warrior Lord Justice willingly gave the ultimate sacrifice to save his brother from the vampire goddess of chaos and night, Anubisa. While willing to trade himself into her service, Justice is unable to force himself to serve the needs of the goddess, and she sends him into the Void. Justice’s revelation of his heritage, spoken out loud to convince Anubisa to take him rather than his brother, unleashed an ancient curse that will drive Justice insane, and his torturous time in the Void has accelerated his mental deterioration. Justice is ready to give into the madness when he has a vision of a woman that not only provides a ray of light in the eternal darkness to which he is confined, but also provides him the hope of escape. As his pain recedes with his view of her, his mental lucidity clears, and he knows that she is his.

Dr. Keely McDermott is an archaeologist with a special gift. Returning from a dig to her campus office, Keely gets an unexpected visit from a patron, Liam, who wants to finance her next expedition. When he tells her that she will be investigating Atlantis and that he wants her because she is an object reader, Keely is stunned. She has kept her gift for psychometry very quiet, fearful of other's reactions and the terrible price she has already paid when people found out about her freakish nature. The unbelieving Keely finally accepts the truth when she arrives on Atlantis with Liam. While the reality of Atlantis still existing is overwhelming, it is nothing compared to the revelation of the man behind a portal into another realm. He is the man who carved the talisman she wears around her neck, whom she has envisioned many times while touching it. Even more disturbing, the wild eyed, dirty and bloodied man recognizes her.

As much psychological thriller as romance, ATLANTIS UNLEASHED continues the story of the race to save Atlantis and humankind. Justice is the most complex and tortured of the Warriors, and now he must confront the duality of his parentage. The Nereid half of his nature is trying to overpower the Atlantean, bent on violence to avenge the father who never recognized him. When Justice unwittingly touches Keely, she sees deep into his soul and experiences the pain and humiliation he has had to endure. The psychic bond between the two is intense and emotional. Keely is able to give insight into what must be accomplished for Atlantis to finally rise and commits herself to not only helping the Atlanteans, but to saving the man she is coming to love.

This character driven tale will grab the readers imagination from page one and hold it in thrall until the end. Imperfect, valiant heroes and the complicated women who love them are the highlights of the series, and this story lifts everything up to the next level. Intense action builds throughout with Anubisa’s army fighting the Warriors, the search for the lost gems of Poseidon’s trident, and a personal war for sanity, redemption, and love. This book handily deserves the RRT Perfect 10 rating for not missing a beat in a complex and expertly woven tale. ATLANTIS UNLEASHED is an epic thrill ride that should not be missed.