Guest Author: 4 Little Life Lessons or What I’ve Learned from the Women I Write by Tracy Wolff 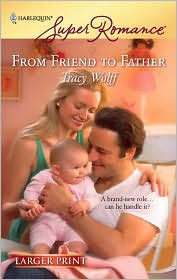 When I was getting my MFA in creative writing, my fiction professors always told me that a good short story or novel must make its readers think. It must have a message and characters that transcend time and race and culture and creed. It must be real. These are, of course, many of the same professors who scoffed at me when I told them I wanted to write romances. The same ones who told me writing genre fiction was a waste of my talent.

Well, here I am a number of years later, writing romance novels and loving every second of it. And while their advice about romance novels were complete idiocy (I’ve been reading love stories since I was in fifth grade and I certainly have no plans to stop anytime soon) a lot of what they taught me has stuck with me—including the fact that a reader should be able to learn something about the human condition from the books she reads.

Now, I write two very different types of books—erotic suspense and family oriented contemporaries, both of which will soon be joined by paranormals when my first novel of dragon shapeshifters hits the shelves next year. And though my books lend themselves to very different plotlines, language and heat levels, one of the things I’ve found has remained the same between my NAL Heats and my Harlequin Superromances, is my characters—and what I (and hopefully my readers) learn from them. Whether I’m writing a kick-butt police detective (my September 2009 release Tie Me Down) or a surrogate mother on the brink of emotional collapse (my June 2009 release From Friend to Father) I tend to gravitate to the same kind of heroines—strong, smart and self-assured. Heroines I can respect and heroines I can learn something from. So, with no further ado, here’s a quick look at some of the life lessons I’ve learned from the women I write.

Sarah Martin (Heroine of From Friend to Father—June 2009): Mother of twin boys and surrogate mother for her best friend’s baby, Sarah has taught me the importance of hanging on to my sense of humor. No matter what life throws at her—from overflowing toilets to a deadbeat husband to falling in love for a second, scarier time, Sarah never forgets to laugh.

Serena Macafee (Full Exposure—January 2009) Serena’s been through the emotional wringer—when she was seventeen, she survived the brutal attack that ended up killing her twin sister. Ten years later, her sister’s murderer—and her own assailant—is being released early from prison and Serena must deal with the emotional and actual fall-out. With her past, she is scared to death of being vulnerable—to anyone, including her lover, Kevin Riley. But as the book unfolds, Serena realizes that being strong doesn’t mean doing everything alone. So from her, I’ve learned the importance of standing on my own two feet—and of asking for help when I need it.

Genevieve Delacroix (Tie Me Down—September 2009) A tough-as-nails homicide detective, Genevieve survives the violence of New Orleans’s streets by staying in control at all times. But when she meets her hero, Cole Adams, she learns that some of the most important things in life—friendship, passion, love—can’t be controlled. Genevieve has taught me the value of spontaneity and that coloring outside of the lines is often more rewarding than doing the same old thing.


Vivian Wentworth (A Christmas Present—December 2009) Vivian reminded me of the importance of keeping an open mind. An attorney who’s spent her career fighting for women who can’t fight for themselves, Vivian is shocked and upset when she ends up defending a seventeen-year-old boy accused of murdering his pregnant girlfriend. But things aren’t what they seem in the case and Vivian must work with her client’s mentor and guardian to keep an innocent boy out of jail, even after he’s given up on justice and himself.

So, what, if anything, have you learned from the romance novels you’ve read? Leave a comment and be entered to win a copy of my first novel, A Christmas Wedding.


Learn more about Tracy and her books by visiting her at www.tracywolff.com

What have I learned from Romances? That's a loaded question because I've learned so much. There's the interesting way different relationships work, and the why of them working.

There's also learning about the settings that the stories take place in. I remember learning so much about wine when I read an older book by an author who has since fallen out of favor by many.

I love that I can get swept up in a story and taken away and forget my own issues, while reading about those who overcome their's.

I love being taken away by a great book, too, Sandi. Isn't that one of the greatest things about romances? That and knowing that somehow there will be an HEA at the end????

I love being able to do and be many things while reading a book such as a nurse, firefighter, etc.

I have learned lots of information about various things just by reading a book.

Mom of 1DD-- that's one of the things I love best about writing-- being able to explore careers I'm interested in. in FFTF. Sarah is a web designer and Reece is an architect.

Great question! I've learned a lot more about some historical time periods than I ever did in any class. Interesting vocabulary (one of my new favorite words is "vexing" and I've been known to use the word "whoreson" on occasion - haha) and social mores of the times -- all very interesting stuff.

I have learned so much about different cities and cultures by reading books.

But yes-- historicals have majorly impressive vocabularies-- when I was a kid reading them (I started at 10) I would use a lot of the words, but mispronounce them because the only place I'd ever seen them was in the pages of my historical romances.

Estella-- I love reading books that are set in places I've never been. Then it's like I get to live vicariously in that city for the length of time I'm reading the book. AT the moment, I'm learning a ton about Charleston, SC and lovign every second of it.

Hi, Tracy, something that I love being reminded of in romances is hope--it's easy to get discouraged sometimes and think that nothing good's going to ever happen, but romances teach me over and again that happy endings do happen, often when we least expect :)

flchen1-- isn't that the truth? Thanks for the reminder.

What I learned is that if a H/h could overcome scandals, improprieties, murders, mysteries, imposters, secret babies, amnesia, sabateurs, vengeful rejected suitors and/or mistresses (did I miss any plot devices?)and still fall in love and have a HEA, then I can surely put up with my boyfriend when he forgets to put the cap back on the toothpaste. Romance novels have taught me to not sweat the small stuff.

I learn to love romance books even more they take my mind off of every day problems. I love them
Penney

I still have some words that are that way, Tracy -- words I've only read, so I'm not sure how they should be pronounced! LOL!