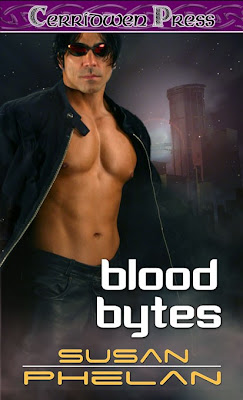 Blood Bytes was a bit of a departure for me in that it is set in the future. However it still comprises those elements that I most enjoy writing and reading about in a story - mystery and suspense, a strong sense of romantic attraction and sexual tension, and a handful of well-developed secondary characters and satisfying, inter-related subplots. And of course, a mesmerizing paranormal hero! ;)

I think the notion was pretty much cemented after I finished my first novel THE CURE (Book One of The Blood Tapestry). Up until that point, I had just been toying with ideas and jotting down scenes. But once I actually finished an entire manuscript, I realized I could and should be doing this for a living.

I wish I knew. They just come to me.

While I'm working on a particular project, I try to choose and listen to music that I think is a musical embodiment of the story line. For example, with THE CURE - I listened fairly exclusively to the soundtrack from the film Kate and Leopard. I'm not sure why but I found a lot of the instrumentals emotionally stirring and THE CURE is nothing, if not emotionally stirring! :) Too, Sting is one of my most favorite musical muses so his song "Until" on the soundtrack quickly became Chancella and Valian's unofficial theme. I even had a singer sing it at the THE CURE's release party. However, for the novel's more sombre segments, I listened to the moving soundtrack from The Last Samurai.

Then for CRIMSON HOURS, I actually changed what I listened to three times as there are three separate stories. For the story Dusk, about a dancer, I listened to a lot of flamenco and tango music. For Dawn, I put on Andrea Bocelli as the pinnacle of the story takes place at an opera. And then for Midnight, about a lonely, bloodsucking cowboy, I listened to the gentle, wistful songs from Brokeback Mountain.

And as for what I chose for BLOOD BYTES - that took a bit of searching. What type of music embodies New York City, way, way in the future, and the hottest vampire escort agency in town? For this, I had to actually create a blended CD of different artists including the dreamy, mystical sounds of New Age instrumentalist David Arkenstone and the pulsing sensuality of Sade as well as the soundtrack from the sizzling Mickey Rourke film Wild Orchid. It took some doing but I finally got the mix just right :)

That they're never really finished. I remember once reading a quote from a famous writer who said something to the effect of "You never really finish a book. You just get to the point where you stop working on it." Boy is that the truth! As a writer, I was surprised to learn that you feel you can always go back and tweak and rewrite. Always. There just comes a time when you choose instead to walk away.

Well, obviously Anne Rice. I dedicated THE CURE to her because she singlehandedly created a new perspective in which to view the vampire and without that, I don't know if I would be a paranormal romance writer today.


My oldest brother Donald has always been very supportive and encouraging.

Yes, I actually plan to have two novels released in the early part of 2010. The first is the second book in The Blood Tapestry trilogy and the sequel to THE CURE; the other, a standalone mystery about a writer-turned-witness to a brutal crime and the vampire detective assigned to protect her.
at April 02, 2009

Hi Susan. I don't know any of these music since I don't hear but I like to look up the lyrics so that I'm going to do. It may give me a feel too. I find it fascinated about how each so differed for each book.

I had assumed, not sure where I saw they were all in the same world, that the books were all in The Blood Tapestry series and that was the trilogy. So now its not. So what will be the series name for The Cure? And BLOOD BYTE is a stand alone, not a series right? I'm one who like to read things in order, smile. It was so great to meet you here!